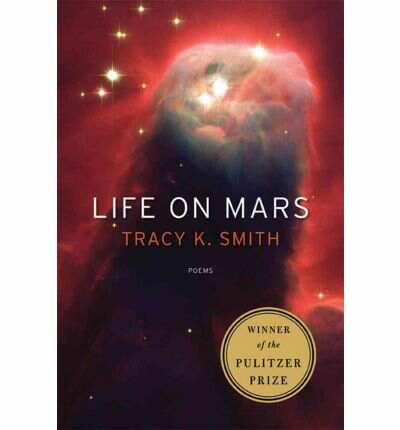 There are some prize-winning books, which, to be honest, after reading, I haven’t felt any wiser as to why they received the accolades emblazoned on their covers. But it’s hard to miss what’s extraordinary about Tracy K. Smith’s Life on Mars. It blew me away with Big Bang impact. It’s clear why this book won the 2012 Pulitzer Prize: it’s brave; it’s visionary; it’s important.

The Pulitzer Prize for Poetry has been recognizing excellence in American verse since 1922, and as the latest recipient of the award, Smith joins a long list of the poetry elite, taking her place among names like Robert Frost, W.H. Auden, Sylvia Plath, and a league of other poetry legends.

Smith’s father worked as an engineer on the Hubble Space Telescope, and she says that in a way, Life on Mars is an extended elegy to him—‘he is only gone as far as we can tell’. But more than being a tribute to one man, the beauty of this book is that it serves as an elegy to all of mankind.

Life on Mars is divided into four parts. Part One asks big questions of life and God, and imagines dubious futures for the human race, while also recalling, with a sense of nostalgia, the carefree naiveté of the 20th Century. Part Two deals with the death of Smith’s father, and draws parallels between the mysteries of death and the vast eternity of outer space, as well as its potential to perhaps harbour other forms of life unknown to us, beyond the physicality of the body. Part Three turns its focus to Earth, and the darkness of certain aspects of society. And Part Four finds joy in the miracle of birth and humble everyday domestic activities, such as walking the dog and making love—tender, delicate moments that are at once meaningful and meagre against the grand backdrop of the universe.

Smith uses space as a metaphor to raise serious questions about human nature and our transient presence here on Earth. With political poems that highlight shocking atrocities such as gang rape, the Fritzl case, prisoner abuse by US military personnel in Iraq, and urban hate crime killings—this book is a call to action, rousing its readers to wrestle against complacency and speak out against the misguided motives and small-mindedness that sickens society.

You get used to doing nothing pretty quickly. Fish on Friday.
Biscuits-n-gravy. It’s a sin to live behind curtains.
Pick up your bed and walk. Memory’s stubborn—
I mean misery. You sit in silence waiting to be chosen.
Behaving. Pick up your bed and walk. You want it all
Over again. Past Perfect. But go back and they make you
Start from the beginning. Climb out, they put you right back in.
You lie there kicking like a baby, waiting for God himself
To lift you past the rungs of your crib. What
Would your life say if it could talk?

This book reminds us that we are part of something much larger than ourselves, and with that realization, comes responsibility.

I was particularly moved by one section of a larger poem, which included postcards from people who had been killed, addressing their assailants from the afterlife. Smith wrote one of these from the perspective of Omar Edwards, an armed, off-duty black police officer, who was mistaken for a criminal and shot dead by white NYPD officer Andrew Dunton in 2009.

Personally, I think Tracy K. Smith is an extraordinary woman, who exhibits tremendous empathy, intelligence, and passion, both in her poetry and general life philosophy. There is an amazing online archive of American stories at MAKERS.com—a video initiative dedicated to “trailblazing women—both known and unknown” who have fought for something bigger than themselves and changed the world. It’s an incredibly inspiring website and I highly recommend it. You can view Smith’s featured videos on MAKERS.com here.

Life on Mars points its ‘oracle eye’ to the outskirts of space and back again—bearing witness to the miracle of existence and the disturbing ‘dark matter’ of contemporary society. Ultimately, the poetry in Life on Mars seems altogether too expansive to exist within such a slim volume—the book becomes its own universe, and the words on each page burn with the intensity and brilliance of stars.

Life on Mars is published by Graywolf Press.