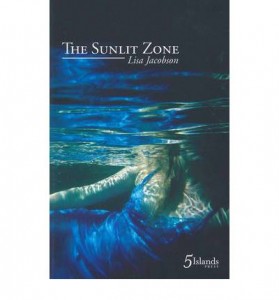 The Sunlit Zone refers to that layer of ocean where the light penetrates, above the dark depths. Lisa Jacobson’s verse novel is aptly named. It is lilting and tidal. Its lyric language is lively, playful, and yet dares to dip into the darkness that dwells under the surface of ordinary lives. This is an incredibly hard-hitting piece of writing, yet achingly delicate at the same time. Quite honestly, I felt a little battle-weary after reading it. If it were a film I had emerged from, I would be in the good company of a throng of other women in the cinema toilets, wiping away the mascara stains from our cheeks in a ritual of solidarity. But since it is a novel, I am left alone in meditative silence, while the story’s characters haunt my mind like gentle ghosts.

A verse novel seems to exemplify literary fiction in its most evolved state. The language can be rich and unusual. Words take on new textures and tastes. The line breaks are deliberate actions rather than an arbitrary mechanical inaction. Meanings take on the ability to multiply and clash in a kaleidoscopic coalescence of sounds, ideas and feelings. Even The Sunlit Zone’s contents page, listing the chapter titles, reads like a complete poem in itself. In this way, narrative verse can be a pleasure to read due to the heightened attention to the craftsmanship of language. The words and images on each page are as artistically placed as if they were brushstrokes in a painting. The Sunlit Zone is not just technically accomplished however. It makes music with language, but that linguistic music resonates with meaning as well—the verse tells a compelling story, with developed and engaging characters and plot lines. Some literary fiction I have read has not held me with the narrative. I have enjoyed the vividness of the writing, but couldn’t care less what happened next. The Sunlit Zone, however, is full of suspense.

…Sun through tree branches
fell on the bed. We looked between
our outspread legs, and kept on looking
till Mum came in.

I let Jack’s hand stray across
the mounds of my small breasts,
let him strum that newfound
secret place inside my knickers,
which set off a vital throbbing
as if some animal burrowed in.

the awkward confusion of those first sexual experiences,

I let Leo insert his small hard cock,
unsure of what I was meant to feel.
Often I didn’t feel anything, just
a mild tingling, which had me
wondering if that was it.

and consequential emptiness of many early sexual relationships,

….But I’m thinking
of Sunshine University, where I learnt
so well to fake it.

and the exhaustion and exasperation of being a new mother,

The baby’s wail starts up again.
—Shut up! she says. Just shut the fuck up!
And subsides into gulping sobs. Oh God,
she says. I haven’t slept, and now it’s time
for his fucking feed.

I empathised with the characters, greatly admiring Jacobson’s gutsy honesty and insightful expression of the human condition. The insecurities, the guilt, the confusion, the desires and disappointments of the characters were all keenly felt, without the writing ever lapsing into sentimentalism. It may be written in verse, but this does not detract from the fact that this is a realist piece—

Next morning I get up for work
before the sun has slid its arse
above the sea’s far brink, wash
my hair and slip on heat jeans.

The half-rhymes and rhythms are not merely decorative, but lifelike and dynamic:

How does anyone get through this stuff?
It all comes out in a guttural croak;
viscous, ugly, mucous in my throat.

The book presents a strong social commentary, and an environmental one, too. The Australia this tale depicts is one with ‘de-sal plants’, genetically modified vegetation, cloned animals and even people. It’s a country where ‘Sydney is L-Kida country’ and Queensland is ‘beautiful one day, tsunamis the next’, with houses ‘drowned by rising sea levels’.

The carbon counter on the wall
reads –2. You have exceeded
your carbon limit for this week.

Such casual references to the state of the planet make this world frighteningly realistic. They act both as a warning and an elegy to a simpler way of life, which increasingly looks likely to become extinct.

I loved this book. It was a pleasure to read, in a quite painful way. It is the story of a woman and a world—both have suffered dreadful loss, but despite everything, keep moving forward, in that exquisite synthesis of fragility and resilience that is typical of nature and humanity.