Literature & Technology: Rules were made to be broken 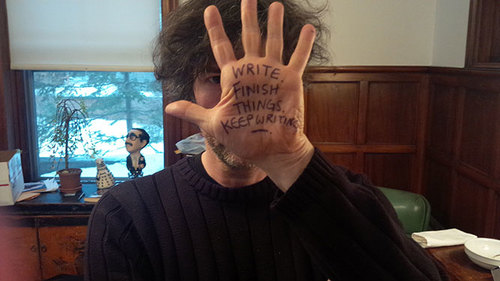 Neil Gaiman has been the latest person in the writing industry to speak out about the future of the book. As the article states, the audience at the London Book Fair weren’t all that happy about what he had to say. From my perspective, I feel as though finally, somebody well-known and established within the industry has spoken rationally, passionately and with excitement about the future of the book. The gist of Gaiman’s talk is that the rules have changed in the publishing industry, to the point that at the moment, there are no rules. And when there are no rules, that creates endless possibilities and opportunities for what the future may hold.

This is not a time to resent change. Change happens. Sometimes for the worse, but often for the better, too. Change has had to happen for the championing of women’s rights. Change had to occur so indigenous Australians were no longer considered second-class citizens, and change is still happening in both these areas. Slowly, change means gay couples can get married and be recognised as a married couple by the government. Slowly, the rules are changing.

The difference in the publishing industry (apart from the fact that publishing is not a hot political topic) is that while change started slowly, all of a sudden that slow change erupted to the point where the industry is changing so quickly that nobody knows what is happening. It’s impossible to step back and take heed of where it is all going. I guess it is easy for me to sit here and write that change can be good and that it is exciting to see where things are going, as I began in the industry just as things started changing. I’ve never known anything different as a writer. I have as a reader, but not as a writer. And it’s easy for Neil Gaiman to say the same thing, because he has always been a writer who has relished new opportunities and has not been afraid to break the rules and try new things. But literature and writing have such a long and rich tradition, and it is easy to feel that this tradition is being threatened by the onslaught of technology into the industry. Even so, it is important to remember that in this, literature is not alone. Technology is creeping into every facet of our lives, and it comes to a point where if you don’t move with the times, you get left behind. So while the lines are still blurry with increased technology in the writing world, thank goodness the industry is embracing technology and realising that the supposed “death of the book” is more likely to come about if publishing companies and writers reject technology when readers are embracing it, and are starting to embrace new innovations and incorporate them into their work. And let’s not forgot that at one point in history, the novel was considered new technology too. And technology is always adapting and changing.

It’s refreshing to finally hear a perspective on the future of the book which is considered, thoughtful and completely calm. Neil Gaiman refuses to panic, instead seeing this time as one which is exciting to be a part of. Instead of becoming caught up in the future of the industry, it is about time writers and publishers start creating the future of the industry. Because as of yet there are no rules and now is the time to start redefining the rules of the publishing world. And once we’ve redefined the rules, we can start breaking them all over again.