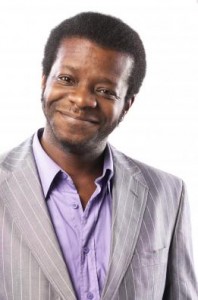 Stephen K. Amos is pretty fly (for an English guy). The Americans have mistaken him for Geoffrey from The Fresh Prince of Bel-Air while the Thais thought he was Samuel L. Jackson. He didn’t mind being called the latter until he discovered that the actor is 63-years-old. His show, Laughter Is My Agenda, had a simple-enough premise even though the jokes were anything but. At this particular meeting you’ll be pleased to know that there were no action items, except laughter…

Amos started the show by saying that comedians are a lot like politicians in that they both stand-up in front of a room full of strangers and tell lies. It’s also worth noting that he shares the bold spirit and, at times, the sort of condescending nature our leaders and teachers possess. While some comedians are content to engage in some cheeky banter with their audience, Amos’ style verged on the hostile a he picked on an 18-year-old guy in the front row who was out with his Mum rather than the girlfriend. It was rather awkward to watch the comedian wait for the guy to answer what his favourite kind of porn is, a question that left the kid rather red-faced for multiple reasons.

The flipside to Amos’ style is that he is also unashamedly honest. He will say the sorts of jokes that lesser comedians would tap dance around. He is certainly not afraid to veer off into territory that is political, absurd and thought-provoking. At times this means the humour can be rather dark but then, comedy wasn’t exactly built to be cute and cuddly. His style was apparently lost on one writer who conceded in their review that they didn’t get the Englishman’s jokes at all. But then, this person also confused The Galápagos Islands with Gallipoli, so who’s laughing now?

In addition to pushing boundaries, Amos’ repertoire is one that is coloured by bravado, even though he is humbled by his roots. The son of Nigerian parents although born in England, he certainly inherited a good sense of humour from his ma and pop. His dad once said: “Stevie, first and foremost you are Nigerian, except when you’re passing through Heathrow airport”.

Amos started doing comedy in order to get attention. He is a twin from a large family and there were moments when even his mother forgot his name. For my money it was these personal stories that were the funniest in the show. That’s not to detract from his other material; I just found myself laughing more. I’d also love to see some of these anecdotes drawn together into a memoir because they’d make for one interesting book.

In the meantime though, fans can enjoy Amos’ sharp tongue and cheeky repartee, because he’d assured us early on that we were gonna “Have a larf”. And unlike most politicians, he actually delivered on his promise.