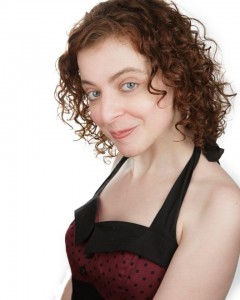 New York City comedian Lynn Bixenspan has recently been hailed as ‘one of the funniest feminists on Twitter.’ Social media has become an increasingly huge landscape of posts and opinions by comedians, artists, and celebrities that try to claim a place with the internet audience. To stand out amidst this huge crowd is definitely an achievement in and of itself. I had the chance to chat to Lynn about her career and found out her thoughts on feminism in the comedic space.

First tell me about how you got started as a comedian and performer?

I’ve been singing and acting in plays since I was a little kid (with a gap when I was too cool/awkward as a teenager). I’ve never let my mom live it down that she wouldn’t allow me to audition to be a Mouseketeer, because I’m like, 2000% sure I’d have been one, obviously.

Comedy-wise, I was influenced by reading my parents’ old National Lampoons and an SNL book they had that I thought was super-cool. I remember being too young to stay up to watch SNL and my parents recounting it for me the next day. I was just finishing college, living at home on Long Island, when I read an article about UCB and decided I desperately had to take improv classes there, which then led me to storytelling and stand-up.

What do you enjoy most about being a comedian?

That I can basically go up onstage and say basically whatever I want, although sometimes that can feel overwhelming. That I can connect with people this way and maybe possibly make them think about something differently,  besides making them laugh.

Also, that it’s given me access to a community that exist almost everywhere. So now whenever I go to a new place, I feel like I can usually find somewhere to get up onstage, and automatically know people. Either people I know from online, or friends of friends, or people I met in a different city. Which segues into…

Have you travelled your shows around the country/the world? If not do you plan to do so?

I’ve done shows and festivals in a bunch of cities in the US. It’s really interesting to figure out what different audiences are like. I have yet to perform outside of the US, but yes, please,  ask me to do your international shows!

Tell me about how feminism has influenced your comedy and your style?

I’ve always considered myself a feminist, from my teen years being obsessed with grrrl bands on, but it’s really been the past 5 years or so that I became more educated about it and so of course it’s ended up influencing my writing and stand-up. But it’s not like I come at it with an agenda, like “OK, HOW DO I WRITE JOKES TO ENLIGHTEN THE PUBLIC ON THE PATRIARCHY AND THE MALE GAZE?!” I write things that are funny and important to me, so naturally, those ideas are  just what comes out.  Sometimes I’ll go into a show thinking, “oh, this audience seems like they might not get my material” and then they usually surprise me. One woman came up to me after a show and said “My husband didn’t get your joke about feminism, and I’ve been having a lot of issues with him lately. I’m seriously thinking of divorcing him.” It seemed like it was one of those “jokes” that has a lot of truth to it. So, you know, my goal is to be a catalyst for divorce. NO! Also, I’ve been brought onstage by a host before as a “feminist comedian” and while both those things are true, it’s not like I particularly want to be known for having one specific agenda. But if I have to be a  “_________” comedian, that’s not a bad adjective to have in front of it.

With your recent fame on Twitter, what sort of response have you had?

Fame! I got a weird feeling in my stomach reading that word. I don’t know how fame-y I am, but I tweet and sometimes people pay attention to it, which is nice.

Twitter was actually one of the reasons I started stand-up. I had done improv and other kinds of comedy, but I always thought “oh, I’m not into jokes. they’re usually cheesy.” (I know. I’m a snob.)

Tweeting jokes made me realize I could write jokes that I felt good about. Even if some of them are completely ridiculous. The combination of doing solo performance (storytelling/a one-person show) and a positive response on Twitter empowered me to try stand-up.

And I’ve made a lot of friends–comedians/writers/other people–through Twitter. One of the highlights was being followed by Joss Whedon,  since Buffy is one of my all-time favorite things. When I woke up last year on Valentine’s Day and saw he tweeted that people should follow me for Follow Friday, I freaked out, cause it was the best V-Day present ever. Having people I admired like my stuff makes me feel like, OK, I should keep trying, even when it’s hard! I mean…trying in comedy. Not just tweeting.

Basically, I just used the previous paragraph to brag.

What does feminism mean to you? Is it important to you?

Equal rights. Having people understand that it’s about so much more than blatant misogyny and more about deeply ingrained ideas we have and how we can work to change those. It’s very important to me!

Tell me about what shows you’re doing next and what your future plans are for your career.

I produce and host two monthly shows in NYC – Relationshit (www.facebook.com/relationshitnyc), which is a storytelling and on-stage show about all kinds of relationships (family, friends, dating). Comics and storytellers relate personal stories and then in each show, one performer tells a story about an issue that is still impacting their current life and gets advice from the panel. The panel is me, my co-host Morgan Pielli, and two actual therapists/experts.

The second one is Stand Up and Sing at Union Hall  and I co-host that with Brandon Scott Wolf.  Comics do their sets and then sing the karaoke song of their choice.

Future plans are to hopefully put out the memoir I’m writing, continue to perform as much as possible and, if someone wants to pay me money to do my own TV show, I will consider allowing them to.