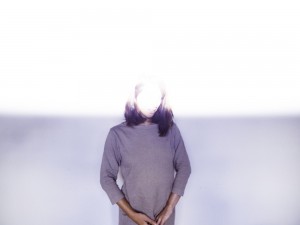 Image Courtesy of Hector MacKenzie of WE LE MIR

We are all aware of Kickstarter and Pozible campaigns: a slew of projects all worth supporting that are vying for our attention and our jingling pockets.

Well, sometimes a particular campaign can really make you want to dig deep because it hits a note within you. With Madeleine Ryan’s GINESTHOI, I felt something stir in my gut as I scrolled the page. My never-ending desire to find a place in this wild, wild world is where Madeleine is coming from. The project is funding a collaborative performance  [ THE UNHOLY BODY OF ] Ignatius Grail, but it’s also about much, much more. GINESTHOI is the brainchild of Madeleine, and I got the chance to find out what exactly this project means to her.

Can you explain how you got into performance/started your career?

It took me over 18 months to learn to walk by myself as a child. It was only when a family friend went to the end of the hallway and held up a handful of costume jewelry that I let go of someone’s hand.

My first steps were toward a costume.

‘GINESTHOI’ is a Greek word that was scribbled on a strip of papyrus around 30BC and it means: ‘let it be done’ or ‘make it so’ and it’s the only surviving trace we have of Cleopatra, the last active Pharaoh of Ancient Egypt. Under the GINESTHOI name I want to create fertile ground for art, for healing and for learning.

I’ve never really fit into the systems that have been offered to me through school, university, acting studios and different workplaces. I’ve often felt like ideas were being put upon me as distinct from allowing me to express myself. I don’t necessarily blame the systems for that, but my engagement with them felt disempowering. Through GINESTHOI I want to offer the support and encouragement that I wish I had had.

At the moment this support takes different shapes. GINESTHOI offers tuition in VCE Theatre Studies, English and Drama. It also sells CARE/PACKAGES, which incorporate the use of different healing methods and are tailored to the individual’s needs. GINESTHOI is also developing a collaborative performance work involving different Melbourne-based artists called [ THE UNHOLY BODY OF ] Ignatius Grail.

What is the Pozible campaign raising money for?

The Pozible campaign is to cover the production costs for GINESTHOI’s first performance work [ THE UNHOLY BODY OF ] Ignatius Grail. It’s really important to me that none of the artists involved are penalized financially for giving their time and energy to the project. It won’t go ahead if I can’t ensure that they’re protected financially. It sets a precedent.

I’m to play Ignatius Grail. I’d like to say that I wrote the piece … I’ve written the script. The actors I’m performing it with – Lois Scott and Amy Gubana – are bringing so much to the world of it that I can’t take credit for. They’re phenomenal. It’s a really collaborative work. There’s music being composed by musician kingtut, light design by Clare Springett, show bags for each audience member by arts collective Lucky Prawn, custom-made costume pieces by JA-H, a short film by WE LE MIR (which can be viewed on the Pozible page) and the venue – Second Story Studios in Collingwood – is going to be painted and turned into a temple by artist Nick Millen. We’ve essentially created the experience we would like to have as audience members. It’s immersive.

What/who inspires you as an artist?

Pain. Compassion. Glitter. Being a woman. Singin’ in the Rain.

A big question, but what does art mean to you?

The sound of a heart opening.

What are your hopes for the future of GINESTHOI?

Essentially, I hope GINESTHOI can offer everything that has helped me to others.

One thought on “madeleine ryan: interview”