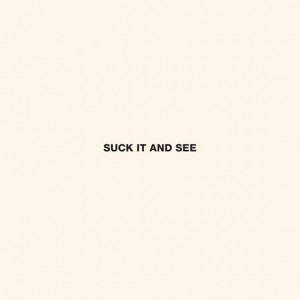 After the raw, brilliant energy of Whatever People Say I Am, That’s What I’m Not, the more refined Favourite Worst Nightmare and the darker, cool confidence of Humbug, what can we expect from the Arctic Monkeys?

Suck It And See is in many ways a continuation of the style presented in Humbug. It seems that gone are the days of WPSIATWIN, with the frenetic screech of the electric guitar, too-cool bass lines and bombardment of drums. Even back in Favourite Worst Nightmare we can start to see hints of what the Monkeys have become – big fans of the distortion pedal.

However, in some respects Suck It And See gives a bit of a nod to the band’s past. There is slightly less of the feel of music has been created in a studio, rather than on the road or in someone’s garage. The songs here rely more heavily on the power of the guitar, as of old.

Frontman Alex Turner is certainly a vocalist who has come of age. He proves himself confident, charismatic and distinctive. Indeed, each album in the Monkeys’ repertoire has shown a progression of maturity in the band as a whole. By Humbug, it’s clear that this is no longer just a band of precocious lads.

If the recent censorship is anything to go by (in some stores in the US the album’s racy title has been stickered over) Turner’s lyrics are not lacking the fresh inventiveness we have come to expect. He is to be highly applauded for writing songs that could surely be read as poetry, especially when most other of the Monkeys’ alt/rock/indie/pop peers have wholly failed in this, instead drowning us with yet more ‘I-love-her-she’s-too-good-for-me’ ballads.

Having said this, it is hard to be convinced that the band’s musical progression has seen any improvement in the quality of the lyrics (that is to say, good though they are, they aren’t any better). Maybe I am still too enamoured with the sharp wit of their debut, but I would argue that it was in that album that the Arctic Monkeys achieved their lyrical pinnacle. The following albums have however been interesting, increasingly obtuse, and therefore increasingly inaccessible. That’s why it’s heartening in ‘Reckless Serenade’ when we hear of “the type of kisses where teeth collide” – it shows a welcome return to form. This is the kind of imagery of which Turner is the master – the kind that is not idealistic, but gritty, tactile and confrontingly realistic.

The first couple of listens to Suck It And See may prove to be a little underwhelming. Certainly not a disappointment by any means, but there’s nothing that really grabs you from the get go. However, if you’re like me, you will have forgotten that there is often more to the Arctic Monkeys’ music than is immediately apparent. What can I say, give it a little time – suck it and see.

Suck It and See is out now through EMI.