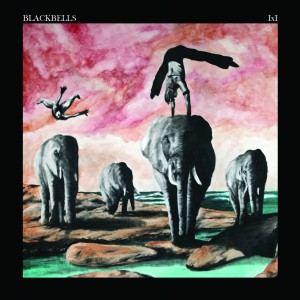 It’s been a while since I’ve heard a really good, musically sound rock album. In the past five years, it has become rare to see a rock band that is just a tried-and-true rock band with no other gimmicks. As production technology advances and computerization becomes increasingly standardized, it becomes a little difficult to find four guys who can just rock out in a way that would make Led Zeppelin jealous.

Brooklyn-based Blackbells is one such band.

Solid musicianship from guitarist Anthony Stella and drummer Austin Schumacher recall The Black Keys, while Ben Rice’s lead vocals and bass lines from Seth Bulkin effortlessly compliment to create a less emotionally intense, more rock-driven Kings of Leon sound. Lead single ‘One by One‘ off their new EP IxI is the perfect microcosm of everything I enjoy about this album: searing guitar riffs, easy backbeat, minimal vocal production and something vaguely 90s that makes the sound both familiar and refreshing.

Blackbells’ sound is all-encompassing and almost too loud at times, but these guys have clearly mastered playing together. I kept waiting for the moment where the heaviness of the music would drown out the overall sound on the album, but that moment never came. The type of balance Blackbells strikes so well again and again on IxI is best reflected in my personal favorite track, ‘Testify‘.

On Wednesday, I attended their album release show and was blown away at their following. I have seen countless indie bands at countless venues in the last year I’ve spent in New York, but I can easily say that this album release had the most solid fanbase I can remember being a part of. The audience supporting the band varied drastically from people who I assumed must be parents to music industry people to teenyboppers scoring their first underage drink to everyone in between. It was really cool to see that the fans weren’t there for the scene – that instead, people were legitimately supporting a band they believe in. That type of energy was contagious and Blackbells fully reciprocated it, performing a show so tight and loud and awesome that it was really more like being at a 30,000-seat arena over a small indie club.

It will be exciting to see what’s next for Blackbells, especially considering we haven’t seen a rock band really catapult into the mainstream since The White Stripes or The Black Keys. These guys demonstrate that potential throughout the EP. Check out IxI on Bandcamp and I’ll see you at the show.