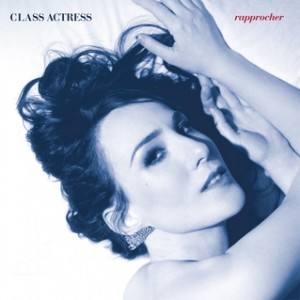 Synthpop trio Class Actress’ Rapprocher opens in much the same way as it continues—with a throbbing, synthetic beat over which Elizabeth Harper gently croons.  Harper’s breathy vocals complement the seemingly discordant electro elements of her tracks, and thus the album holds together in an unexpected way. The result is pleasant and undemanding listening.  Rapprocher’s mesh of airy female vocals with harsher backing is an unconventional move that warrants credit in its own right. Within the release are several commendable tracks.  The first, Keep You steadily builds to become rousing and compelling.  Harper aches in Love Me Like You Used To, before taking an especially sultry turn in the bittersweet Need to Know.  All The Saints and Bienvenue are each comparatively boppy tracks that utilise the synthetic input more strongly than the rest of the album.

Overall though, I’m inclined to think the album holds together almost too well. The continuity of the album as a whole is such that the energy flags overall. Despite the ethereal quality of Harper’s lovely voice, the end result is something almost dirge-like in its moody composition.  Class Actress’ origins lie in Mark Richardson electronically manipulating some of Harper’s original, acoustic output. This method presents both a strength and a weakness. While the synthetic reworking of Harper’s presumably ambient acoustic work may serve to revitalise it in some instances and add a superficial interest, the tone ultimately grates. Most tracks receive similar treatment, rendering them interchangeable without careful listening. This seamlessness detracts from the listening experience overall—while Class Actress certainly have a consistent sound, it’s just not exploratory enough on a song-by-song basis to garner much excitement.

That isn’t to say the album is bad. It’s a promising debut, albeit one that seems a little half-baked.  There is a lot of potential here however, and it will be interesting in the future is to see where Harper, Richardson and Rosenthal take this effort.