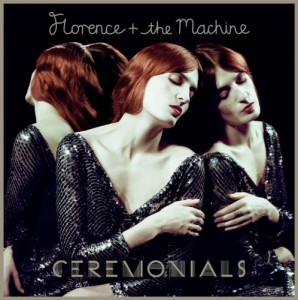 Florence Welch is one of the most talented musicians in music today. Since her 2009 release, Lungs, people all over the world have been captivated by the power of her voice, interesting musical arrangements, and all-over positivity. Lead single “Dog Days Are Over” became an anthem for anyone on the brink of his or her life in a positive way. It was only a matter of time before the world took note of how talented this once “weird” musician and her amazing back-up band are. While Florence retains some of the indie charm, her absolutely undeniable success in the mainstream means that she has crossed over into the pop stratosphere.

I saw her this time last year and was blown away by her talent. I made the connection that Florence’s voice really reminded me of Annie Lennox’s of The Eurythmics because of the power, compelling strength, and feminine quality coming from someone kind of atypical to a ballad songstress. But in the year that followed, I began to wonder when the new material was going to be out because the band had fully capitalized on the success of Lungs.

Florence + the Machine’s second full-length album Ceremonials was released on 28 October 2011 in Australia and on 1 November 2011 in the U.S.

Filled with the instrumentally complex pop anthems we’ve come to know and love from the band like lead single “Shake it Off” and succeeding tracks on the album that show off her voice like “Lover to Lover”, “No Light, No Light”, “Heartlines” and last but not least, the amazing “Leave My Body”, Florence + the Machine has lived up to the hype and anticipation with this release. These are the kinds of songs that the band became famous for – featuring heart-stopping vocals, complex instrumental arrangements, intellectual subject matter, expert production techniques and a unique pop sensibility.

However, I like the songs on this album where she deviates from the Florence + the Machine norm the best because it shows how much the band has grown. While the harp arrangements and big backing sound propel most of the songs, it’s clear that Florence + the Machine has been working with new producers who challenge their typical sound. Songs like “What the Water Gave Me”, “Never Let Me Go”, “Seven Devils”, “Spectrum” and “All This And Heaven Too” still capture the epic quality of her sound, but the ways the band reaches the pivotal moments in those songs are new and exciting.

There are some moments where the new album fails, though. The heavy production on “Breaking Down” actually takes away from the qualities of the band that make them so unique. The siren-like voice and baroque pop sound are gone in this song, replaced with a pretty standard pop-rock song that sounds like filler to me. It’s the only song I’ve been skipping in my consistent listen-throughs of this album.

All in all, Florence + the Machine has put out a great second album that both further demonstrates and challenges their captivating sound. I am excited to see this live because of the heavier production on the album, but the live videos I’ve linked to in this article are testimonial to the fact that the band always sounds as good in person as it does on the album.

One thought on “album review: florence + the machine, ceremonials”