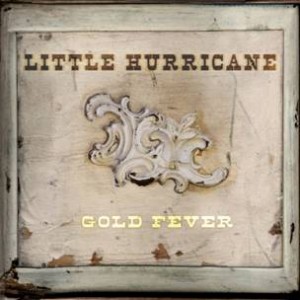 Four years since they first exploded onto the live music scene, wowing audiences with their dirty blues beats and swampy guitar slides, San Diego duo Little Hurricane are back with their newest LP. Currently touring the States with home-grown roots heroes, John Butler Trio, Gold Fever represents the sophomore efforts of a band that has worked hard to follow its own path.

Recorded and self-produced by the band in a charmingly rustic 19th-century apple-packing house in a former gold-rush town, using vintage equipment derived from the heyday of psychedelic rock, Gold Fever sounds like it was conceived in a hipster’s wet dream. It is in keeping with the DIY ethos of a band who still remain cheerfully independent, and determined to let the spirit of their corner of the world bleed into their music. Fortunately, whilst the wilds of Southern California are perhaps more renowned for hippies and ethereal folk singers, Little Hurricane have not strayed too far from the bluesy precent set by their absurdly good 2011 debut, Homewrecker.

Tone Catalano showcases some of his finest electric guitar slides to date on ‘Summer Air’, before the album takes a turn for the kind of indie fare you wish they played on the radio. This is especially true for the album’s first single ‘Sheep in Wolves Clothes’, which though perhaps devoid of the band’s more stylistic flourishes, is a mainstream indie hit in the making.

Just as you start to worry that Little Hurricane has turned into every other band that has been paid lip-service on alternative radio, ‘Breathe’ appears, and you realise that you are in the very capable hands of an outstanding live act. This isn’t an album after all. This is a set, and ‘Breathe’ is the moment when the lights go down and everyone in the audience realises that they need to hush up and pay attention. It is a sweet, folky duet, accented by harmonica flourishes, which leaves you floored by the surprisingly outstanding female vocals of drummer CC Spina, who is usually relegated to back-up singer.

Then, whilst your guard is down, Catalano steps up to deliver arguably his rawest vocal performance of the album in ‘Con Man’, with the band’s signature electric guitar and blues beat reminding you where you are, and who you’ve come to see.

‘Sorry Son’, is perhaps the largest departure, sonically speaking, from the rest of the album, with a heart-wrenching tale of familial dysfunction delivered with an almost R&B rhythm, before it descends into a Queens of the Stone Age-style heavy rock outro, wrapped in a R&B coda.  ‘Superblues’, as the title might suggest, is a return to more familiar territory, Catalano letting loose with blistering vocals and impressive guitar solos, revealing himself every inch the charismatic bluesman.

If this were a live show, we have now entered the encore, and it is time to give the crowd what they want. Little Hurricane do not disappoint. To put it bluntly, title track ‘Gold Fever’ has swagger. Spina returns to share the vocal duties in a swingin’ ode to making it rich, complete with clap-along.

Finally, the show ends on ‘Grand Canyon’, another stomp-and-clap number which teases to a marvellous crescendo with a fantastic harmonica solo. The house lights come on. You find yourself smiling along, dizzy with the weight of it all.

What Little Hurricane does, which so few bands are able to manage, is translate the live music experience across to those sitting at home, infusing listeners with a taste for grimy blues and a lust for adventure.

In the same way that Bon Iver’s For Emma, Forever Ago is the kind of album to shut yourself away for the winter and dream about heartbreak, Gold Fever very much belongs to road trips on deserted highways, dreaming of larger glories.

Gold Fever is out May 2nd on Shock Records.