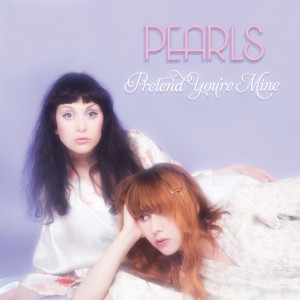 Melbourne band Pearls has just released an album that’s sure to leave a lasting impression on listeners. For a debut album to make such a bold statement about a band’s identity is a huge achievement in itself, but Ellice, Cass and Ryan have made the task seem a lot easier than it probably is. Seemingly effortlessly, they have crafted a string of songs that are cohesive and memorable for their individuality, while at the same time capturing a distinctive sound that will define them as a band.

Both their musical and vocal sounds could be easily compared to those of Alison Mosshart and Jamie Hince of The Kills. However, there is still plenty of room for an alt-rock band like Pearls on the world stage. If you enjoy the male/female vocal contrast of The Kills it probably won’t take long for Pearls to convince you.

The opening number, ‘Big Shot,’ has a huge presence and it deserves to be played at an arena show. It has an anthemic sound to it and the louder you listen to it, the better it is. They’ve chosen an excellent track to win their listeners over the first time around.

The same could be said of ‘Dirty Water’ and ‘Pretend You’re Mine’. Although we don’t get to hear them until the end of the album, they inject a bit of energy after things get a little mellower. Here, the band demonstrate to us how big they can go with their sound. It is easy to imagine these songs live.

In the case of ‘Better Off Alone,’ less is more. Everything is understated here but it all fits together perfectly without any notion of a particular instrument or voice competing to dominate the rest. This song proves that they can master both quiet and loud to let their songwriting skills shine.

The album is only nine songs long, but it won’t leave you feeling unsatisfied with the band’s efforts. However, you will be wanting to hear more from them, so hitting repeat will have to do until they start recording again. This band sounds like they all know who they are musically, what they want to get from their art, and in which direction they want to take themselves. I’m going to confidently make the call that Pearls will be one of Australia’s most talked about new acts this year. Pretend You’re Mine is worth a listen or ten.