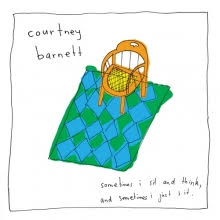 My interest in Courtney Barnett was first piqued because she reminded me of fellow Melbournians, Lower Plenty. I fell swiftly in love with her music because it is strong, wry and steers clear of the ‘music for the masses, perform and grin routine’.

Sometimes I Sit And Think and Sometimes I Just Sit is Courtney’s first LP. This album perfectly displays the songwriter’s eclectic skills. Lately it seems like Courtney is always on tour; she and her band are currently in Europe, then major Australian cities in May, two days later an extensive US tour. This may explain the lyrics from the third song on the album, ‘An Illustration of Loneliness (Sleepless in NY)’. Similarly, ‘Elevator Operator’ is another narrative with a novel like descriptions. This song exemplifies how different our brains are but at the same time how we are all so similar. The contrast between the clean and overdrive guitar complements the song.

Personally, I am not sure why ‘Pedestrian at Best’ was chosen as the lead single for the album. The sound is not particularly innovative, with that grunge sounding guitar. However, the Bob Dylan-esque vocal delivery steals the attention from the generally repetitive motif that drives the song in a kind of ‘pedestrian’ way. Courtney writes rhymes that flow off the tongue and delivers them with a dry, sarcastic tone. Her lyrics are confused, contradictory and often honest about lying, reinforcing the point of the song. Perhaps this is also a dig notorious music industry, lyrically and in the video for the song.

Fourth on the album, ‘Small Poppies’ is grass swaying in the wind, with bluesy guitar and a vocal delivery to match. Despite its name and lyrics telling of the gentrification of Preston, ‘Depreston’ engenders a feeling of optimism. The slide guitar on ‘Dead Fox’ creates a southern country desert vibe, with Courtney describing the dichotomy of humans destroying the environment yet at the same time using nature to purge the man-made world. ‘Nobody Really Cares If You Don’t Go To The Party’ reminds me of why I moved away from Melbourne, but also why I miss it. The subtle delay on the lead mimics the vacillation of enjoying your bed and wanting to go out. There’s also ‘Kim’s Caravan’, where every element fits together perfectly. I hate to compare, but this song reminds me of ‘Night Light’ by Sleater-Kinney. The delay creates an ethereal soundscape leading into a climatic ending. The Transvision Vamp vocals on ‘Boxing Day Blues’ and the familiar and glorious melancholy make me nostalgic for my childhood.

I’m jonesing on this album and I reckon you will be too.

Sometimes I Sit and Think and Sometimes I Just Sit is out March 20 via Milk!/Remote Control Records