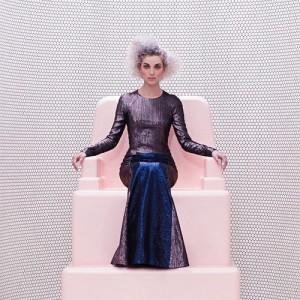 You might know her by the name Annie Clark. Maybe you recognise her as that wild-haired sister who knows her way up and down a fretboard. Perhaps you don’t yet know her at all. If not, it would be worth getting acquainted.

St. Vincent has just unleashed the aural force that is her fourth studio album, St. Vincent. And so it ought to be self-titled; it’s a statement. As always, her lyrics paint a wonderfully vivid picture of what goes on inside the mind of an artist whose audience will always indulge her quirks. Somehow she has managed to turn an encounter with a rattlesnake into the grand opening of one of the most refreshing albums you are likely to hear this year (I’m calling it). Admittedly, it took a couple of listens to really “get” ‘Rattlesnake’, but it is a definite winner and is worthy of its place.

‘Digital Witness’ is another energetic track which is accompanied by a video that provides some entertaining viewing. Clark muses ‘If I can’t show it, you can’t see it,’ and we’ve all witnessed the way that the ‘Age of Technology’ has enabled the serial over-sharers to leave their digital footprints. Laced with a catchy brass riff, Clark’s audience becomes a marching band following her lead. It’s hard not to get involved with this one, it really deserves its own volume setting.

She closes with ‘Severed Crossed Fingers’, where the pace of the synth and bass soften and her vocals are at their purest. It’s a satisfying end to a thematically charged album. If she hasn’t won you over by now, this display of raw emotion should seal the deal.

The production on St. Vincent is impressively neat. Even the songs that seem to be carried by the simplest melodies bear their own intricacies that are accommodated quite comfortably by John Congleton’s mastery. Clark and Congleton prove once again that they are a solid team, fusing rock with electro-pop to achieve a first-class result that few others could boast. It’s hard to fault their combined effort on this record.

Behind St. Vincent is a woman who knows her craft well, and whether or not you find Clark’s style of music particularly enjoyable, both her talent and diligence are undeniable. Without sounding too biased, there is surely at least one track on this album for most listeners to connect to. St. Vincent’s existing fans will not be disappointed by this offering and newcomers might find themselves wondering why they hadn’t discovered her sooner.