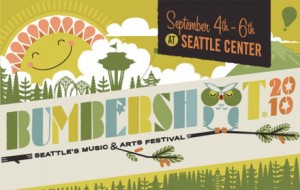 A decision to make an impromptu visit to the U.S. in September was made a lot easier by Bumbershoot, Seattle’s Music & Arts Festival, over the Labor Day weekend at Seattle Center. For the non U.S. residents amongst you, this means September 4th through 6th at the place where that funny looking thing that makes the Seattle skyline immediately recognisable is (aka the Space Needle).

My Bumbershoot experience began with Atlas Sound, the side project of Deerhunter lead singer and guitarist, Bradford Cox. Despite never having heard music from either band/artist previously, the rave reviews both had received from people whose opinion I respect made for a pleasant and unexpected surprise. Even if it weren’t for Cox’s lovely ambient and meandering tunes, Atlas Sound would be worth seeing almost as much for his awkward banter; the perfect accompaniment to his kind of weird appearance.

Next up, my companion, Calvin, and I caught Civil Twilight whose well-polished sound matched the clean-cut style of the South African trio. It also leaves little to complain or rave about, so we trekked on into the EMP Sky Church, where we queued up to see the Feral Children, a local quintet our couchsurfing host had raved about. Their two vocalists aren’t what you’d call notable singers in the conventional sense (like, say, Hope Sandoval or Matt Berninger) but they make for a welcome and unique addition to the indie music scene. Their looks appropriately adhered to their band name (apart from the ‘children’ bit…but I do mean that in the best possible sense) and Jeff Keenan happily marched around the stage, nonchalantly knocking over his bandmates’ equipment, to end the show.

As we vainly try to get to a position where we’ll be able to see Edward Sharpe and the Magnetic Zeros, it becomes apparent that there has been a severe oversight in programming the schedule. The crowd packs in tightly but unfortunately ignores the lively performance; I get the distinct impression that everyone has come to see ‘Home’ performed and they don’t appear to be capitalising on the band’s multitude of other songs. A girl standing next to me certainly falls into this category, and I hear more about her birth by Caesarian section than I hear of the set.

Even if I didn’t like his music, missing Bob Dylan at Bumbershoot would’ve been some kind of sacrilege I’m sure. The set is okay, I guess, but it probably would’ve been completely unmemorable had it not been Bob Dylan. No one could say that Dylan is altogether renowned for his vocal clarity and enunciation and when you add the fact that he’s almost a septuagenarian and has spent decades drinking (etc), you have lyrics that are more or less indecipherable. From our not-so-prime position in the stands, Calvin and I see far more of one of the guitarists in the band than we do of the man himself, and I daresay Dylan may have even been upstaged. My dedicated Googling has failed to make known who this other gentleman was, however.

So Calvin and I leave the mainstage to catch the end of the Raveonettes performance, a Danish duo who have spent a considerable amount of time listed in the top friends of various (American) West Coast psychedelic bands. They would be forgiven for being annoyed with a scheduling clash with Bob Dylan as well as the ineptitude of sound technicians unfamiliar with how much reverb is too much (I don’t know either but I’m not paid to), but they nonetheless deliver their brand of dark psychedelia with an appropriate amount of passion and rockstar nonchalance.

As we leave Bumbershoot, we run into none other than Dandy Warhols frontman, Courtney Taylor-Taylor, whose casual stance amongst the crowd blows my mind much like it did at the Clean Air Clear Stars festival in 2009. I realise that wanting to be a music journalist doesn’t put me in the best position of being able to show I’m completely star struck, but I’m hoping that this is something I’ll get over.

That, or I’ll have to be perpetually drunk.

Day two begins with Ra Ra Riot, a band whose name I’d heard numerous times but who I’d never bothered to listen to because I assumed they’d be too indie to process.

The hipster glasses admittedly irk me a touch, but I can forgive this because the band is fantastic. The performance is energetic, the songs are beautiful, the bassist looks like one of the Gallagher brothers and Calvin walks away ready to commit his life to Alexandra Lawn, or as she’s better known, ‘the most beautiful cellist in the world’.

Motion City Soundtrack is a bit too American emo crooner and upbeat for me, which probably sounds like a contradiction but should make perfect sense to anyone who’s seen them live. Frontman Justin Pierre is engaging and energetic but his ramblings lack direction (as ramblings often do, I guess). Their albums are more or less carbon copies of one another, but the kids in Connies seem to love them.

Who could ever see Courtney Love without some level of apprehension? Well, not me, but Ms Love delivers in all the ways you’d expect her to (being that she clearly isn’t sober) but also in many you don’t (being that she is funny). If nothing else (and there is much else), Love should be commended for playing at a festival in a city that awarded her more bad press than any other artist in the lead up to Bumbershoot, and that is still hung up on Cobain’s death almost two decades ago.

And of course, I end the evening with the Dandy Warhols. My reviews of the Dandys should almost never be trusted, so instead of raving about how awesome they are, I will simply say that their performance made a fan out of Calvin and that will have to be testament enough. However, unlike in previous performance (that I’ve seen anyway), Courtney Taylor-Taylor talks shit to the beautiful Zia McCabe during ‘Bohemian Like You’ due to a problem with her keyboard set-up that happened because they had to cut out part of their set. I don’t know if that made sense, but either way, it was undeserved. And just in case you needed to see for yourself –

And then, day three. Despite our best intentions to attend the final day of Bumbershoot, Calvin and I decide to get facial piercings instead.

But I hear it was great.