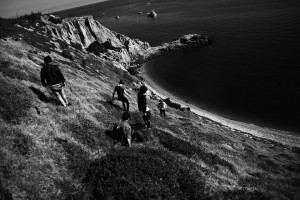 Dirt Farmer are a long way away from their home town. Formerly from Albury/Wodonga, the now Melbournites have been making waves within the music industry. Front man Stuart Barlow is a veteran of the live music scene, spending the past two years on tour with Lisa Mitchell, before forming a band with his brother and high school friends. With an EP called ‘Gladstone Street Circus’ on the way, industry reps have been predicting big things for the country boys.

Playing to a tiny room in the Oxford Art Factory in Sydney, the fivesome were in the iconic venue to launch their single, ‘Johnny Marble’. The Albury/Wodonga natives were relatively unheard of – the gig was packed with friends and distant relatives and a couple of polite onlookers.

The Faults took to the stage first. The guitar and drum duo got straight into the gig. Like so many other two man bands (think White Stripes, maybe Band of Skulls), the Faults were engaging the crowd with their solid drum beats and one man guitar solos.

Playing to a backdrop featuring an Annie Leibovitz documentary, it only seemed appropriate that the sounds reverberating out from the duo were being playing in front of Bette Midler draped in roses and John Lennon’s infamous photo with Yoko Ono.

As the documentary plugged on, so did the band, as they quickly progressed through each song. Psychedelic seems to be the buzz word of the moment, and The Faults have embraced it. When they announced a ‘slower and more intimate’ part to the set, what it really meant was a greater and longer build into their cascading solos. The duo finished with a Beach Boys-like song to prepare the stage for the headliners.

Dirt Farmer then went on to take over the stage. Dressed in denim shirts and tiny hats, the five genetically blessed guys tried their best to squeeze onto the tiny stage. However, as they began their performance, any issues with stage size seemed to be instantly forgotten.

The first song saw the band overcome any space constraints on the their gig. Seemingly synchronised, Dirt Farmer immediately launched into a high beat, high energy introduction. Harmonica was used to great effect and the crowd instantly responded. The tiny stage it seemed, made the band seem more endearing to the Sydney crowd.

The fivesome then went into ‘Genie’. The melodic song was a showcase of their harmonies. Their second song, ‘Real Young’, featured a slide guitar solo, and showcased the band’s multi-instrumental talents.

But their set wasn’t without its technical difficulties. While a drumkit was quickly screwed back in, singer Stuart Barlow did his best with his stage banter, while other members chipped in. An anecdote about accommodation gone wrong from their last visit to Sydney, ending in ‘… but then again, everywhere in Sydney smells like vomit’, almost lost the crowd. Almost: the charm of the boys managed to win over the crowd again as they continued on with their set.

Relatively early in the set, their title single, ‘Johnny Marble‘ came on. The opening riff quickly engaged the crowd, as heads could be seen nodding. The chemistry and camaraderie could be felt emanating from the band, as they went on to thank distant relatives in the crowd. Girls continued to be a salient feature of their songs throughout the set, which seemed to appeal to the large female contingent present.

For a band who cites the Velvet Underground, Bob Dylan and 60s beach music as their influences, Smithy seemed to confirm their musical leanings. The upbeat tunes continued to resonate with the crowd as their set gradually wound down to an end.

Self confessed summer song ‘Kick It’ continued on with the festivities until ‘Honey’ began to draw the gig to a close. But their absence wasn’t for long as Dirt Farmer quickly went back on stage to finish with an aptly titled song, ‘Party Song’, to wrap up the night. By this stage the crowd was visibly bouncing and it was clear that there would be more talk about the Albury/Wodonga turned Melbourne boys when their EP comes out later on this year.