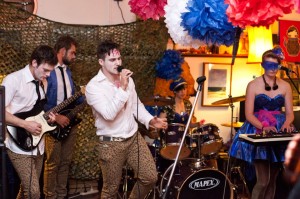 Being an avid gig-goer, sometimes the gig ritual can get boring for me. You know the drill – enter venue, get drink, stand midway towards the back, band enter stage, nod head vaguely and bop to music. Repeat (maybe you guys are better at gigs than me? I feel like I’m doing it wrong).

That’s why I was pretty psyched to go to the third Last Prom show this year, themed War, and held at the Front Gallery & Café in Canberra. The Last Prom never have a typical gig, because they are not a typical band – a concept band focussed on the end of times, each gig is themed around both The Four Horsemen Of The Apocalypse (War, Pestilence, Famine and Death) and a high school prom.

The band are currently gearing up to a stage show spectacular in November, The Last Prom : An Apocalypse In One Act, featuring ten new songs and telling the tale of the love story between Death and the Antichrist (Julia Johnson and Nick Delatovic respectively).

The show last week was like a warm-up, and I’ll be surprised if there wasn’t a spike in ticket sales after it.

Support acts, Handsome Luke and The Sinbirds did an awesome job of warming the crowd up. Handsome Luke’s energetic dancing and smooth beats were an excellent opener – his final song in particular drew the crowd onto the dance floor.

The Sinbirds looked like ‘50s rockers with their slicked back hair and sunglasses, and their harmonic pop ballads fit the theme too. Despite a couple of technical difficulties at the beginning, they finished their set with gusto.

Dead DJ Joke, who kept the crowd going between sets was amazing, as per usual. His mashups of classic pop with grimy RnB were particularly awesome (seriously, check this guy out here. He is so good).

By the time the Last Prom took the stage, the tiny venue was feeling quite crowded, and people seemed pleasantly tipsy. Wearing matching outfits (leopard print pants and purple blazers for boys, purple prom dresses for the girls), and death-inspired make-up, it was obviously going to be a theatrical set.

Gyrating and dancing, frontman Nick Delatovic kept the crowd entertained, especially with his witty banter between songs.
The high energy pop music had the crowd dancing, and combined with the amazing decorations throughout the venue and the themed outfits, gave the impression of an apocalyptic prom quite well.

Favourites included ‘Half In Shadow, Half In Light’ and Julia Johnson’s deadpan rendition of ‘I don’t Wanna Be Your Friend’.

Having been to every other Last Prom show this year, the only downside to the set for me was that the songs were well known to me, and nothing new had been added – understandable, but I feel like a preview of some of what we can expect from the November show might have been a nice addition, and could have sparked even more interest in the show.

Overall, I left the gig with my dancing feet appropriately sore, and with pop music running through my head.

I won’t be missing The Last Prom : An Apocalypse In One Act, and you can grab your tickets and more information here.