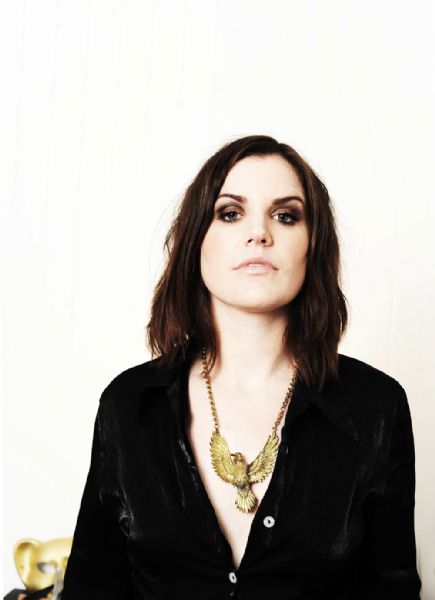 We all know that bad relationships and drug addictions have historically been rather effective fodder for rock ‘n’ roll songs. But there’s something to be said for the best inspiration coming from the least expected of places, and Abbe May has been a musician for long enough to have realised as much.

‘It’s always kind of an aim of mine to make things a bit different, mostly because I get fairly bored,’ explains May. ‘It’s both a conscious thing and an unconscious thing because you end up choosing to listen to lots of different music and reading different books and hanging out with different people and you get inspired by very different things.’

So how has this translated to what she’s surrounding herself with while she’s currently writing her second album?

‘I’ve been listening to a lot of Sonic Youth, and also a little bit of dub and some trance as well which I’ve found quite fascinating. Lots of weird stuff but always rock ‘n’ roll.’

It’s this rock ‘n’ roll that Abbe May obviously loves most about music, and also what lends itself to a certain image and lifestyle. But May’s sincerity and cheerful laugh make it apparent that none of it is inauthentic or just for show, even when I question her about her most recent gig in Adelaide, where she was spotted holding a bottle of Jameson Irish Whiskey upstairs.

‘I think it was really quite an authentic drunkenness that was going on,’ she laughs. ‘I can’t really speak for the boys, but I’m actually fairly healthy most of the time. But when you hit the road, you do tend to get fairly bored, you have a lot of time waiting for the show to start and a lot of booze on offer for you so it’s very hard to say no.

‘I guess the drinking … it’s a rock ‘n’ roll cliché really, but truth be told, we were honestly just pissed! To a degree as well, I mean I’m Irish, I have a massive tolerance for alcohol so I would never say, do this at home. I might be fairly small looking but I have a bit of a camel hump on my back for Jameson, you know!’

She further explains that the joviality and enthusiasm for a few drinks is a result of her relationship with her band mates.

‘This is the first band I’ve had where we’ve sort of been really united on a friendship front as well, so it’s like having your best mates on the road with you and there’s just unlimited alcohol and pretty much close to unlimited time!’

But alongside the tales of debauchery, it’s also apparent that May is passionate about the work side of being a musician too, admitting that being a woman in the “man’s world” of rock ‘n’ roll does have the potential to pose a few extra challenges (or advantages, depending on which way you look at it).

‘I think it’s a bit of a benefit, because you’re not quite as common … I think it would be remiss of me to say that there’s no difference there, I’m just not necessarily sure that it’s always a bad thing,’ she considers. ‘I think if you’re smart, you use what you have, and women definitely have a lot to offer. We’re certainly very intelligent in different ways to men; I think women exist within the subtext and we have a certain way about us that is very powerful. I think it’s important to use it rather than to consider it a disadvantage. It’s pretty amazing to command attention based on your skills and your talents and what you have to offer, you know, it’s really what you strive for. I certainly think that being a woman has its advantages!’

Make sure you catch Abbe May on the Main Stage at the Pyramid Rock Festival on December 30, at 2.35pm! Her first album, Design, Desire, is also out now.