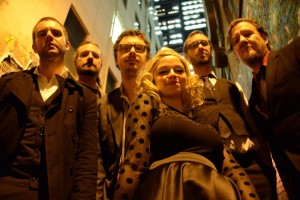 Not to be confused with the ‘70s group of the same name, Melbourne-based rock ‘n roll soul outfit, The Perfections, are grabbing Melbourne’s thriving soul scene by the ears and not letting go. They have been so busy playing live that it has taken them three years to release a debut 10” EP – yes, on vinyl, friends. Vocalist Christina Arnold and I chat via email about Bette Davis, ribbon mics, and why this six-piece has been called the laziest soul band in Melbourne.

On influences, Arnold says, ‘I’m a massive Bette Davis fan and her attitude and presence are definitely a huge influence on my performance. She’s really dynamite. I love her tongue in cheek delivery of what are some really raunchy lyrics! Marva Whitney is another huge favourite of mine. We are equally as influenced by groups like MC5 and The Dirtbombs as we are soul…And we are new fans of JC Brooks and The Uptown Sound (check out Baltimore is the new Brooklyn on Youtube!).’

The EP’s old school sound is warm analog all the way, even if it is conveniently available online at Band Camp. ‘When we went to record, we wanted to avoid that modern hi-fi sound, so we used ribbon mics and tape machines, and old school compression,’ Arnold explains. ‘Neil Thomason at Headgap has a lot of awesome gear and he really knows what he is doing. Everything was tracked live to tape, with vocals and a few bits of horns and tambo overdubbed the next day (the only digital stuff on the record) then mastered for vinyl by Adam Dempsey. Shane’s Gretsch jazz drum kit sounds really sweet on this record as does Fabian’s ’65 Jazzmaster, which he had plugged into a Sherlock V30 head/Matamp 2×12 cab.’

Recently Arnold and Pisandi were on Melbourne’s PBS FM and described as ‘Melbourne’s laziest soul band’. Arnold laughs, ‘Well y’know, we’ve been together three years and this is our first release – we were pretty slow to the mark and clearly the demand for our wild garage soul was greater than the supply! 2012 was a good year for us, though – we got the record done and played a stack of excellent venues and supported some fantastic acts. Playing LuWOW and Cherry Bar are absolute highlights, as was rockin’ out with Deep Street Soul at the Toff.’

The song Peaches will very easily end up on your heavy rotation – an ode to a special lady friend that is going to inspire impromptu dance parties wherever its sound waves may go. I’m geographically half a world away and I wiggle every time I hear it. This, and their energetic live shows are probably why they have gained the attention of the Black Keys’ Dan Auerbach, who deejayed at a Halloween show The Perfections played.

Arnold says, ‘That was an amazing night – we were playing our spot at Cherry Bar when we heard Dan would be there DJing later in the night. He played some excellent tunes!’

These guys are ‘looking to keep the momentum up from this release with some really fun shows in the new year at LuWOW and at Revolver with our friends Judge Pino and The Ruling Motions,’ Arnold says. ‘We are also really keen to get back in the studio and record the three or four new songs we are working on at the moment. If we can, we’d love to fit in some shows interstate and hang our with our mates The High Learys and Beehives Go-Go in Perth!’

I ask how the band fits into Melbourne’s thriving soul scene. ‘Melbourne has an outstanding music scene in general, and the soul scene here is full of great bands,’ Arnold says. ‘Cherry Bar on Thursdays is really the best place to go to catch some of these acts. There is also a strong network of soul women in Melbourne. The scene here tends to be a bit of a sausage party – it feels reassuring that there are a group of women doing their thing and doing really well (and not just in the soul scene).

‘In terms of where we fit, I think we’re pretty different from most of the soul bands in Melbourne because we have a garage sound. I’m not sure there are many local acts that you could compare us directly with. We’re not trained musos, we’re not focused on polish or perfection – just rocking out and really feeling the energy of the songs we play! I guess this gives us a degree of versatility with who we gig with and who our fans are.’

You can get more info on The Perfections at their Facebook page.