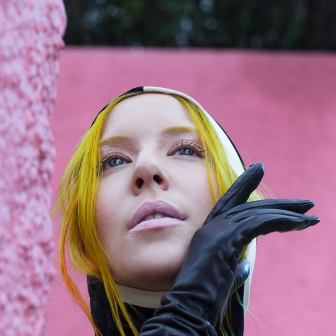 So begins Marge Piercy’s feminist sci-fi classic, Woman on the Edge of Time, an allegorical tale of a woman who can communicate with the future and in doing so stirs a yearning for a more egalitarian world.  I am reading it at the recommendation of Katie Stelmanis, Canadian synth-pop composer of band Austra.

‘It’s so good, and it was written in the 1970s but it could have been written yesterday, it’s so relevant to right now, and you just gotta read it,’ she tells me from Nashville, Tennessee where she is currently on tour for the group’s latest release, Future Politics.

Of course after getting off the phone I immediately source the book, because when one of the most divine voices in music gives you a tip, you take it. The sad thing is that it certainly does feel timely. Despite being written over forty years ago, the social and political state of today seems even more desperate than the 1970s. Much feminist momentum has been lost, and the rights that were worked so hard to gain for many minority groups are being whittled away. Not to mention, the environment is being plundered and poverty is more prevalent than ever.

Similar to Piercy, Stelmanis is acutely aware of the climate of her time, but also able to look beyond the current state of dread. Piercy last year revisited her novel forty years after its release stating, ‘Hope is the engine for imagining Utopia.’ The declaration could easily be the prelude to Stelmanis’ single of the same name, and her whole philosophy for Future Politics.

‘I was just trying to put people’s focus on the future… I feel like right now and for the past long while there’s been so much focus on resistance and protesting bad policies and I don’t think there is enough emphasis on actually creating something different or creating something to replace what we’re currently living in. I think when times get really hard, like right now, it’s become even more difficult to imagine what it could be like in a better situation. So I think keeping the imagination alive is a really good way to stay optimistic.’

Stelmanis began writing the album during a cold and lonely Montreal winter, and she describes the songs written during this time as dark, and reflective of her mindset. A spontaneous move to Mexico City changed that trajectory, not just on a sensory level with its warm climate and vibrant palette of colours, but also thematically as she became more immersed in alternative theories for future development.

‘I just became obsessed with the idea of the future, really to the point where every time I would read a tidbit or discover a book that had something to do with post-capitalism or some idea of how we could get somewhere else, I would buy it online or go to a bookstore, and I became kind of obsessed with absorbing information.’

And what does an ideal future look like for her?

‘…In the book I recommended Woman on the Edge of Time, the future they have created in that world is one that I idolise, like the future that exists in Star Trek: The Next Generation. In Star Trek, it’s a world without money and a world post war … That’s kind of what’s exciting about technology. Technology really does potentially have the power to eradicate any form of scarcity and eradicate a need for human labour… and to me that’s really revolutionary and would be a very awesome future.’

The video for Utopia reflects on technology in a different way: the ties we have to our devices to a point of being controlled and trapped by them. I ask Katie how she thinks we find the balance between being connected to news and movements through our social media without becoming enslaved or distracted by it.

‘That’s definitely a constant struggle that I think a lot of people are dealing with. I really think that technology is being used more than ever to control people rather than liberate people. The potential of the Internet is amazing but we’re basically using it for marketing… Everything we do on Facebook or Twitter or Instagram is just information that is feeding back into a system that is really not trying to liberate us by any means, and that’s really frustrating… It’s hard, the effect of social media has really resulted in Trump so it’s difficult to be positive about it right now but at the same time it’s obviously a very powerful way to spread ideas and gives us the freedom to do that.’

Despite Future Politics seeming so on point, the album was ready for release a year ago, so Stelmanis had no way of knowing that this was the world it would be propelled into. It came out on Inauguration Day and she comments on the synchronicity:

‘It’s like I unknowingly created some sort of response or tool to react to the current climate. It’s a very weird reality.’

And when I ask what role she hopes her music will play in shaping the future:

‘What I hope now is quite different to what I set out to do. Originally, I just wanted to have these conversations about future and sci-fi, but I feel like what the album has become is this tool that people are able to access in order to not feel so alone… It’s really easy to feel disenfranchised and sad about what’s going on. I made a record about feeling sad about politics and it’s kind of crazy that it’s coming out at a time when people actually really need that.’

Soothing as a cool breath on a wound, with it’s blanketing atmospherics and celestial vocals, Future Politics is certainly a place to feel comforted and optimistic as we look towards a better tomorrow.

It is out now through Domino Records.

2 thoughts on “keeping the imagination alive: post-capitalism, feminist sci-fi and optimism with katie stelmanis of austra”