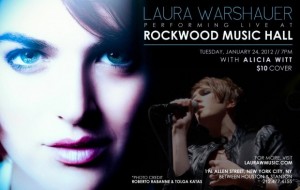 Sometime at the end of January, I decided to attend a Laura Warshauer show at Rockwood Music Hall, perhaps New York’s most famous venue for emerging/newly established musicians. I had been craving new music more than usual (I blame the hibernation that winter inevitably brings) and when I saw the show announcement, I knew I’d be in for a good one.

I had read a little bit about Laura before – that she was one of those performers who can instantly connect with everyone in the crowd, that she went to university with Prince William and Kate Middleton years before they became the couple the world knows today, and that her voice is a mix between Stevie Nicks and Kate Bush. All of these things are true, but what I found to be most interesting was Laura’s voice. Her voice has the kind of scratchy, deep quality to it that reminds me more of Janis Joplin more than anyone else, while the barrenness of the live performance I saw (during which she played just an acoustic guitar) made me think of Adele.

Laura has one of “those voices” that doesn’t need much accompaniment, but as I listened to her debut album The Pink Chariot Mixtape after hearing most of it live, I realized that the heavily produced versions of the songs I liked so much at the show – “Tonight, Tonight” and “Wishing Well” particularly – recalled only an early Sheryl Crow.

I’ve been listening to the album in the days and weeks since that show, happily humming along and singing the songs to myself as I walk through the subways or am in the shower. And after all, isn’t that what every burgeoning pop star wants? More than many other musicians I’ve had the privilege of reviewing these past few months, Laura Warshauer really sticks out to me. Her songwriting is honest and relatable without bordering on cheesy, her voice is something really special and the critics are right when they say she really does know how to connect with a crowd. During the live show, you could literally feel the warmth she projected from the stage.

Word on the street is that Laura’s working on a new album to be released this spring, but in the mean time, check out The Pink Chariot Mixtape online.