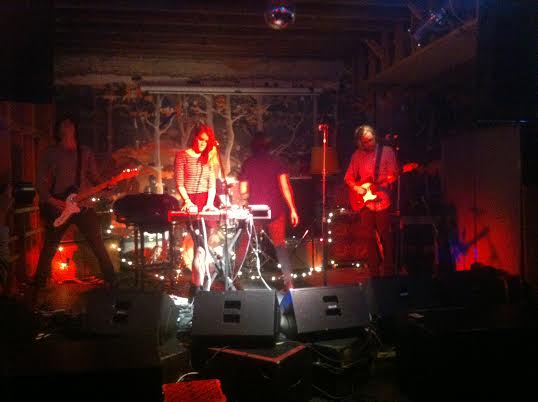 Tiny candles and the odd light bulb line the wood-panelled, cork walls of the dimly-lit gig room at The Workers Club. It’s five minutes past eight and the first supporting act of I Know Leopard are echoing calm, acoustic melodies to a small, scattered crowd. Little Dreamer, a four-piece band with a smiley front-man who downs beer in between songs, sure makes walking alone, late and sober into a gig where you don’t know anyone a little less daunting.

Slow Dancer is next to grace the small stage. Accompanying the upbeat, countryish and –  at times –  slow tunes is the faint smell of chorizo that wafts through from the club’s kitchen, amalgamating with the aroma of burnt out candles. You feel like you’re in a warm, hidden, underground den, not wanting to leave for anything or anyone.

A larger crowd forms as third and final support act All The Colours takes to the stage, perhaps relieved to have found this secret space away from Melbourne’s wild and ever-changing weather. It quickly becomes apparent that the suit/bow-tie clad gentlemen of All The Colours have charisma. The audience is left baffled and delighted by a guitarist who could easily be compared to Hendrix and a lead-singer whose on-stage antics involve ridiculous guitar tricks and a passion for dancing on top of the band’s drums and speakers. This band loves to groove and has everyone in a foot-tapping, jiving frenzy until the very end.

Following a swift set-up, the members of I Know Leopard find their places on the fairy-light laced stage and, without hesitation, give us ‘She’, a mesmerising concoction of gentle guitars, sweet harmonies and breezy, summery vibes, creating a truly magical first-impression on the crowd. Listening to them is like being in a trance, their ability to capture an entire audience achieved in the blink of an eye. They are the kind of band you want to show to the whole world, yet at the same time hide under your bed out of fear someone will steal them away.

I Know Leopard has been compared to bands such as Beach House and The Jesus And Mary Chain due to its dreamy yet upbeat, out-of-this-world style, but in all honesty, the band is in a realm of its own. The set meshed echoes of upbeat indie rock, heavy drum beats and beautiful harmonies that were not exactly fit for dancing, but were something that shook you to the core.

Their final song for the night, ‘Hold This Tight’ takes off and generates a loud cheer from the crowd. It is the band’s second single to be released and is a glittering, sun-drenched ode to their friends. You can’t help but feel sadness as the song draws to an end. A bittersweet closing to a beautiful, genuine, heart-warming show.

It is regrettably over, and as I Know Leopard leave the stage, people stare in silence; not wanting to move or comprehend that all good things must come to an end. The only thing holding us all together is the thought of I Know Leopard’s debut EP ‘Illumina’, due for release later this year. Brace yourself.