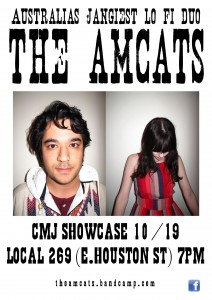 I think you guys know me well enough to know that I love The White Stripes. I was looking through my portfolio on Lip and realized that I’ve never explicitly said that, but my undying love for the Black Keys as well as female musicians makes this a logical assumption.

So when Shane McIntyre and  Renée Andrighetto, perhaps better known as Adelaide’s very own The Amcats, contacted me about seeing their showcase on October 19, 2011 during the 2011 CMJ Festival in New York, it took about five minutes of listening to their White Stripes-inspired tunes to figure out that I very much liked what they’re doing. Luckily I was able to attend the Mexican Summer Showcase at last year’s CMJ, so I was very familiar with the way the whole thing works and quickly replied “yes” to The Amcats’s invitation.

CMJ (College Music Journal) is an industry resource that features album reviews, gig reviews, ticket information, community events, blogs, and merch from or about generally under-the-radar musicians. For the past eleven years, CMJ has silently been influencing indie music.

The longer I’ve lived here though, the more I see that CMJ is uniquely a New York City festival – 4 days of over 500 bands playing in a bunch of dive bars and music venues across two boroughs. Only in a place as big as New York can you have as many bands playing at the same times in so many different locations of the same type. It’s not a traditional festival in that there’s no camping involved – it’s subway stairs and networking with music industry people and lots and lots of overpriced beer – but the main takeaways are traditional: stick around long enough and you’re introduced to some amazingly talented bands that achieve commercial success over the next year.

When I got to The Amcats’s show at a bar I’d never been to in the East Village called Local 269, I was immediately taken by how sincere and fun “Australia’s Jangiest Lo-Fi Duo” was. It felt like hanging out with old friends more than meeting a new band to cover. Meeting them like that, right before they went on stage, gave me an interesting perspective on the show because they were so low key and funny, but once they took the stage they turned into verifiable rock stars. The duo played a great showcase featuring many of the songs off their 2010 release Truckstop, 2011’s 7” Peggy Sue / Rain Rain Rain and some of the newer material they’d been working on during their stay in New York. This 4-song medley video I found on the band’s Facebook page does a great job at demonstrating precisely how talented Shane and Renée are.

As with The White Stripes or The Black Keys, you get a sense of awe that two people are capable of producing the type of sound that the band is known for. I was really blown away at The Amcats’s musicianship; Renée absolutely killed it on the drums and Shane’s guitarwork was the perfect accompaniment. Sure, The Amcats will always draw comparisons to bands like The White Stripes because of the female drummer and guy-girl duo aspect, as well as to The Black Keys because their music also helps indie kids remember how awesome rock music is, but The Amcats’s sound is the kind of music that people at CMJ (and everywhere else, really) are interested in.

I will be legitimately surprised if The Amcats remain underground for long. Bands like them – modest, approachable and hugely talented rock bands – are key figures in the recent shift in the mainstream back to traditional rock and roll that we’ve only just begun to see.