new australian theatre production explores dementia, facing the past and coming to terms with life 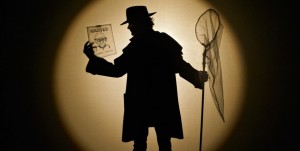 Audiences around Australia are being treated to a touching and humorous piece of theatre, It’s Dark Outside.

Following the story of an old man who wanders into the wilderness at sunset pursued by a dark, shadowy figure, It’s Dark Outside tackles the little discussed and often sensitive theme of Dementia. With 332,000 Australians currently living with Dementia (a figure set to increase to 400,000 in the next ten years) and over 44 million affected worldwide[i], it’s likely that you, or someone you know has experienced this illness in someone you love.

Commissioned by the Perth Theatre Company, It’s Dark Outside was created by Arielle Gray, Chris Isaacs and Tim Watts, the team behind the international multi-award winning production The Adventures of Alvin Sputnik: Deep Sea Explorer. I caught up with Tim for a chat about the show, puppetry, and the way dementia affects most of us.

Despite witnessing his grandfather’s health deteriorate due to Dementia, Tim wasn’t aware of just how common the condition was when he started working on the production. However it didn’t take him long to realise that many people share his experience in one way or another-

“There’s not much art or investigation that explores these very awkward emotions [that witnessing dementia evokes]….I’ve been making theatre for years and this show has had by far the most emotional response…it’s a very personal connection and something that people are really struggling with. For most people, the show seems to be very cathartic.”

Beginning life as a ‘call of the wild’ tale, the production switches between a Spaghetti-Western style story of an old man on the run, and a touching tale of someone at the end of his life, suffering from delusions yet still retaining a sense of freedom and adventure.

The production has no dialogue and instead relies on a musical score written by Perth musician and composer, Rachael Dease. For Tim, this score is central to the production, and was actually an integral part of the devising process-

“When what’s happening on the stage is very simple and still, the music fills the gaps and evokes a much more emotional response. The processes of devising and composing the performance were so interrelated you can’t actually separate the two.”

Not only does the lack of dialogue allow the score to work its magic, it means the the production can be taken anywhere in the world, and meaning can still be found. As Tim says- “I believe in showing, not telling.”

Another way It’s Dark Outside creates meaning that is both subtle and open to interpretation is through the use of puppetry, mask and animation. According to Tim, puppets are an extremely effective theatrical tool as not only do they encourage greater use of the imagination, they have an innate playfulness and sense of presence that many actors find difficult to achieve. This is a special thing for a production that strives to catch the moments of joy and lightness that Dementia can bring, those moments of humour that take root in tragedy, where laughing becomes a release. Anyone who’s experienced this will know what I mean.

Whilst the production explores the various experiences of Dementia, its chief purpose is to entertain-

“This isn’t a production solely for people who have experienced Dementia and Alzheimer’s and we’re not trying to intellectualize the condition. Rather, we’re trying to create an intuitive and imaginative experience with the prime goal being to entertain an audience.”

It’s Dark Outside is on tour nationally until July 25. I’ll be seeing it at The Street Theatre in Canberra on June 3 and can’t wait- watch this space for a review!

[i] Summary of Dementia Statistics in Australia, www.fightdementia.org.au.