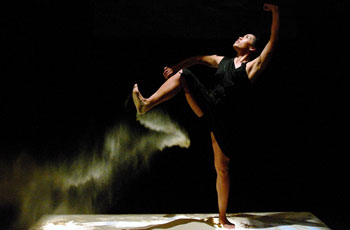 A dancework that explores ‘connections to place, landscape and origins’. This is how performance maker and designer Paula van Beek describes Opal Vapour. The formidable piece combines elements of traditional Javanese arts with contemporary dance, music and design. I spoke with van Beek as she and her talented collaborators, dancer and choreographer Jade Dewi Tyas Tunggal and musician Ria Soemardjo, embark on a national tour, taking them to the Street Theatre, Canberra later in the month.

Created across cultures , Opal Vapour offers a dynamic exploration of the ways in which our place of origin and the environment around us inform the lived experience. Ideas of identity, spirituality , ritual and belonging are evoked by the piece. The traditions and rituals of the past offer one way of recovering this connection which is often lost.

The collaborative piece draws on Tunggal and Soemardjo’s Indonesian and Australian heritage. As van Beek explains, Opal Vapour was inspired by the classical Javanese arts and the rituals associated with them. These include martial arts and shadow puppetry. The latter is one of the most celebrated traditional art forms in Javanese culture.  Drawing on this tradition, the three collaborators created a kind of ritual in their piece, playing with the ideas of shadows and puppets.  ‘We tried to make Jade a shadow’ van Beek observed, adding that the performance plays with the idea of the dancer being a puppet.

A native of New Zealand, it may seem a curious choice for van Beek to draw on Javanese culture. Although she had not visited Indonesia prior to working on Opal Vapour three years ago, van Beek responded to the motifs of Javanese art and culture. The ‘loss of ritual’, in her view, is a casualty of modern life. In an effort to reintroduce ritual, Opal Vapour combines traditional Javanese arts with influences from Australian and New Zealand cultures, resulting in a unique dancework that invites audiences to reflect on their background, connection to place and the traditions of other cultures.

The development of Opal Vapour reinforced the themes of place and identity. ‘We wanted to make the work in places’ van Beek explained, adding that she and her collaborators liked the idea of  ‘going somewhere and having a special experience’. This was achieved through residences, with allowed the three collaborators to work closely together on the piece. The residences meant that the three worked and lived together, resulting in an intense, productive time where Opal Vapour came to life. Initially developed in Port Macquarie and Hobart, the team headed to Indonesia in 2011 where they had direct exposure to the culture and arts they drew inspiration from.

Opal Vapour’s fusion of traditional and contemporary arts from different cultures results in what promises to be a compelling piece. Van Beek’s set design and Soemardjo’s haunting music and vocals are a haunting backdrop for Tunggal’s physical yet intimate performance. Opal Vapour is a dynamic dancework that is not to be missed.

‘Opal Vapour’ is being performed at the Street Theatre, Canberra 14-15 June. The production will then head to the Blacktown Arts Centre from 21-22 June,  See the  ‘Opal Vapour’ website for more information about the dancework and additional performance dates and destinations.