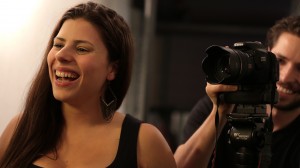 Epiphany Morgan and Carl Mason – the duo behind 365 Docobites

If you haven’t heard by now about the 365 Docobites being shown on SBS2 every night from June until next year, it’s about time you got in the loop. Epiphany Morgan and Carl Mason are Sydney-based partners in life and in filmmaking, who have accomplished the mammoth task of filming 365 small documentaries – or ‘docobites’ – at locations across the globe, every day for a whole year.  The idea was simple, if slightly crazy; film a short documentary about a single person, in whatever city/country/continent that they were currently in, and post it online each day. Sounds easy enough, but as Epiphany explained to me as I chatted to her over the phone – on a day that both of our bodies had decided it was flu season – it was a lot more hard work than she could have ever imagined. The journey, though, has made her and her partner stronger and more sure of themselves than ever.

Could you tell me about your passion for documentary filmmaking?

I really love making docos. During the filming I do the interviewing, so I get to sit down with this person and have these amazing conversations which you don’t normally get to have in everyday life; where you have eye contact all the time, whether it’s for 10 minutes or 20 minutes or a half an hour. I get to know this person on a really intimate level and I just really love that.

I get to share that conversation with a whole bunch of people and people get to learn from that and I love that. I’ve found what I really love to do.

I can imagine then that you learned a lot when you were interviewing these people.

Absolutely. We do filmmaking workshops in high schools and one of the things I say is that it’s totally human to make assumptions about people when you see them, but be prepared for that assumption to go out the window because 100 percent of the time my assumptions are wrong and I love that.

How did you come up with this idea to make 365 ‘docobites’– is it something you planned for a long time or did it happen quickly?

When you’re a doco filmmaker it’s hard because it’s not like you’re writing a script that you can make up at any time; as a documentary filmmaker it’s real life, so you have to be patient and on the lookout for an idea and also allow that to come to you as well.

I was working in a production company, two years after I had left Sydney Film School, and we were doing commercial work and I just thought ‘I want to make documentaries.’ I made one in film school before and that’s what I wanted to do. I thought, you know, I’m young and I don’t have children or a mortgage so this is the time that I need to take to try and go for my dreams. I quit that job and I was working freelance and I was giving myself the time to just stumble upon an idea and I also knew I wanted to, with my partner Carl, to travel with him.

Then, one day I was in the stationary shop Kikki K and in there was a book that just said ‘365’ on it and it just had one number per page going up. So I thought, ‘What about a documentary which went for 365 days and followed one person’s journey for 365 days?’ And then I thought: ‘Why not 365 documentaries in 365 days?’ That was the birth of the concept.

I told everyone I knew my idea and they were just like ‘you’re absolutely crazy!’ and I said ‘I am.’ But we did it, and we left with 3 months of funding and we just decided to leave anyway, even though we only had that much. We stretched it to 6 months of funding by eating rice, and then by that time we had developed a fair following online so we were able to leverage that with funding from tourism boards and a crowd-funding campaign and we pre-sold filmmaking workshops back home so we could keep going.

Innovative thinking is just so wonderful. No matter what you want to do, there’s a way to get there. You might have to go through five back doors to get there, but you can find your way.

Did you plan where you were going to go?

Right at the beginning we had a plan, a very vague plan.  We wanted to try and get to every continent, bar Antarctica. We really wanted to get around the world; we really wanted to show life everywhere. That was the plan, but there was a fair chunk of time in Europe and after that we went wherever we had sponsorship. We never put any of our own money in, which was pretty amazing.

We got some pretty amazing sponsorship in the end, which was pretty unreal. After Europe we booked our flights to South America without having any money to get out of South America. That was a huge gamble because that is the farthest you can get from Australia. We thought, ‘If the crowd funding doesn’t work then we will be stuck in South America,’ but we believed that it would work so we took the risk.

It sounds like you lived that quote ‘high risk equals return.’

Yeah! We met this one woman in Greece and she was on a pilgrimage from the Netherlands and she wanted to go all the way to Jerusalem. She said that God had appeared to her and told her to leave everything and just walk to Jerusalem. When we met her in Greece she had just been walking and totally relying on everyone’s support and were travelling without a passport or anyone. She told us that if you have faith, not faith necessarily in God but in yourself and your journey, you will get there one way or another. It may take a long time but you will get there. I thought, ‘That’s kind of how we’ve done this whole, we just keep going right, that didn’t work, let’s try something else’

I suppose you’ve learned a lot from this about how to be resourceful and to continue on your journey when everything looks like it’s not going to work out on the surface.

That’s true. I was very naïve at the beginning, which I think is a beautiful thing because you keep going forward with this very optimistic point of view and it can get you really, really far. I’m quite glad I was naïve at that time. That innovative thinking, I bring it into everyday life now.

So if you’re now not as naïve: would you do this again and is there anything you would do differently?

Yes! When we got back we were so physically and mentally drained, it was such a huge thing to do. I have grey hair now and I’m only 25! So it was very, very full on and it was just really intense; we had worked 17 hours a day, every day and we just kept going. We didn’t have a choice; we had to do this (because we wanted to obviously). But when we got back we had reached our end of the line and we needed to rest. But absolutely I’d do it again in a heartbeat but I would do it differently.

I would try and get all the funding beforehand and I would get a social media person to distribute all the films and post them. I would also maybe do 3 months filming and 3 months editing because it takes time to do a film everyday. In terms of doing the whole thing again, I would of course because it was unbelievable and we grew so much ourselves. It was amazing, but it was hard!

Now that it’s being aired on TV; are you getting recognition for your hard work?

It’s great because initially I did approach the traditional avenues such as Screen Australia and Screen NSW and then the ABC and SBS and you pitch it to them and you try get funding for it. Because I was 22 when I was going for the funding, it was really hard, even though the doco I had made had won an award. It was still really hard; I was female, I was young, I didn’t have 20 years of experience behind me. So then having the series being picked up by SBS when we came back, it was kind of that moment of maybe this was someone that didn’t think this would amount to something but it did and now they’re backing us. It was a nice full circle that showed us this was something worthwhile.

There’s not that much funding in Australia. Especially as you’ve got to give that funding to a company that is experienced, so why would you risk that on a 22-year-old who has this crazy idea? Why would you risk that? So I can understand why we didn’t get it in the beginning and I think that young people, we have to prove ourselves to a point. We have to work for it, don’t wait for handouts; just try it out yourself.

Everything that young people are dealing with now is trying to get their foot in the door but they are stopped by the catch-22 of needing to have experience first. Your message is that you just have to do something to get that experience, no matter what it is.

Yeah, and it may mean that you have to work seven days a week or do some weird internship where you’re getting coffees for people forever, you know, I did that too. I just kept going and kept making my own stuff. If you’re a filmmaker there’s no reason that you can’t use your iPhone to go and film something. There are so many film festivals out there that are just about films made on iPhones. Just get out there and try it! You know I’m sick today, you’re sick, but we keep going. We have to just pull it together, it’s hard, and there are plenty of days that I want to just lie in bed and so I do, but if it’s something you’re interested in, that’s a gift. Most people don’t get to find what they want to do in life. If you do then chase that: chase that so hard.