q&a with the directors of old wives’ tales 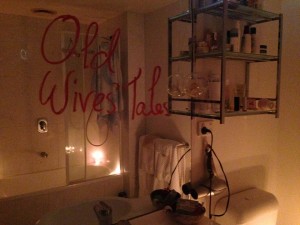 The newly created Tallulah Theatre in Melbourne is putting on its second show, Old Wives’ Tales, from the 18th-21st of May. The show features six pieces, which are directed by six different women who are working towards making a name for themselves in the theatre scene.

I caught up with three of the directors, Jean Tong, Ebony Beaton, and Danielle Holden, and asked them about what has driven them into an industry that is still mostly male-dominated. They are all breaking down the glass ceiling in their roles, and showed me that they are truly passionate about their work and are here to stay.

Could you tell us about your career so far?

JT: I’m primarily a playwright and director, but I’ve stage managed, production managed, dabbled in sound and lighting design, and even more rarely dabble in performance. My career so far, and hopefully in future, has mainly involved increasing my skills across as many areas involved in theatre-making as possible. I’m currently working with The DIG Collective, and a play I’ve written—TERRORISM—is being produced by Four Letter Word Theatre the week after Old Wives’ Tales. I’m also currently one of the UMSU Creative Arts Officers at the University of Melbourne, which gives me a bit of insight into administration around the students arts environment.

EB: I have been living in Melbourne for about a year and a half, before that I was living in country Victoria, performing in community theatre shows and working at a small drama school called DAAW (Drama and Acting Workshop) as a director/mentor/teacher with children aged 5-18. I attended a part time acting course at The Victorian Collage of the Arts in 2014, and I was also a Malthouse Provocateur. Since moving to Melbourne I’ve been getting involved in independent theatre, I was part of Platform Youth Theatres’ Collaborations and Explorations season at La Mama, which was hugely successful and sold more tickets than any other show in La Mamas history. I also worked with Samara Hersch on her production of The Judgment at La Mama Courthouse as a documenter and assistant stage manager. Later this year I will be working on a project with newly formed The Ribcage Collective at La Mama, this group has been created by last years members of Platform Youth Theatre.

DH: In terms of directing, I had directed previously at an amateur high school level. Once I began university, I assistant directed for “Athens Reborn,” presented by Melbourne University Shakespeare Company. In terms of devising experience, I was part of a devising theatre troupe called “Daring Greatly” for two years, and learnt a lot about both experimental theatre and devising. Previously, I had largely acted, twice portraying an Elizabeth. I performed as Elizabeth Bennet in “Pride and Prejudice,” and as Elizabeth Proctor in “The Crucible.”

What made you get into the theatre scene?

JT: Seeing shit musicals as a young child and really enjoying them.

EB: As a young child I was very shy and my parents put me in an after school drama class.

DH: I am absolutely fascinated by the process of story-telling. And theatre as a form has such a breadth of techniques for telling stories. It is such a marriage of the text, the spatial, the aural and the visual.  I have found so many entry points into theatre. In writing and the process of creating and developing a story. In directing and bringing a story and a vision to life. And in acting, just the sheer enjoyment of inhabiting another person.

What about directing do you enjoy most?

JT: Taking ideas that sound like they wouldn’t work, and figuring out how they would work. Testing good ideas and feeling like the work I’m making is actually saying something that needs to be said.

DH: Working with a cast. First and foremost. I love drawing the best performances out of people. I enjoy bouncing interpretations back and forth with them. And I feel so proud of them watching how far they have come from our first day of rehearsal to our last.

Could you tell us about the piece that you are directing for the upcoming show Old Wives’ Tales?

JT: My piece is ‘DOCTOR, DOCTOR!’. The initial concept takes for its premise the existence of gender bias, the necessity of some healthcare providers’ profit-driven approach, and how the authority of the medical professionals trying to do good things in that system come up against the gender biases that are difficult to talk about. I draw from interviews conducted with women and non-binary folk, and I’ve used those quotes and experiences in what has become a game-show set-up. Hopefully as a satire people will feel like the content is approachable and they’ll settle in comfortably until a few truth-bombs get dropped.

EB: My piece ‘FIRST YOU LICK IT’ has changed a lot over time, my vision of what it would be when I first though of it was kind of like a “food party” with performers activating the space to help encourage audiences to eat joyfully and unashamedly. The piece has turned out very differently to that due to the nature of collaboration, but I think the essence of my original idea is still there. It’s now more of a make shift peep booth, where audiences are invited to watch the performers from behind glass. In our piece we are exploring the idea of how sex and food intersect when it comes to the feelings of shame and desire thourugh a surrealist, playful lense. Our piece has very little text and is a visual provocation for the audience and leaves a lot of doors open to them for interpretation. This has been a very hard journey for me because the issues and themes within this piece are so personal to me, but I have learnt so much about directing and about myself throughout this making this piece and it’s been so rewarding. In the future I hope to expand this piece into a full-length production.

DH: The piece I have directed is titled ‘Matriline.’ On a surface level it is about three sisters on a train, at different times, in different places. It explores the unique relationship between mothers and daughters. This is a relationship that has been complicated by its placement in a wider patriarchal system. Ultimately, ‘Matriline’ is exploring relationships, history and identity.

Is it important to you that a show is featured and created by women and if so, why?

JT: I think it’s an important shift in our methodology of making work, and I’m hoping that it will begin to shift our ideas around what a work can or should be. There’s also that thing where when a show features lots of, and is created by lots of, men, no one would ask this question. They’d just assume that those were the best people who could tell those stories. Until we get there, having a show explicitly made by, for, and with women in mind will change our ideas about whose gaze it is we think about when we think about art, making work, and narrative form.

EB: It’s extremely important to me to see shows created by women and gender diverse people, we are so often not given a platform or a voice to share our stories and opinions and I feel incredibly privileged to have the opportunity to tell a story that is not often told within Old Wives Tales.

DH: Absolutely. It is a matter of representation. Not only does the work prioritize female voices, but it is grounded in female experience. It lends authenticity. That is not to say that work created by males is not valuable, but simply that these works inundate the theatre scene. There is always something to gain by having a diversity of voices and experiences represented on stage.

Don’t miss this one! For more info and to book tickets, click here.