Reading beyond the comfort zone 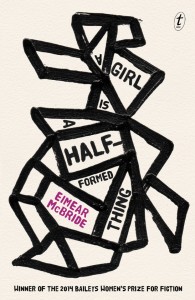 For you. You’ll soon. You’ll give her name. In the stitches of her skin she’ll wear your say. Mammy me? Yes you. Bounce the bed, I’d say. I’d say that’s what you did. Then lay you down. They cut you round. Wait an hour and a day.

It’s clear from these opening lines that Eimear McBride’s debut novel, A Girl is a Half-formed Thing (2013) isn’t switch-off-at-the-beach material, but rather as Kerryn Goldsworthy noted in the Sydney Review of Books: ‘a piece of high modernism a century on’. McBride wrote her novel in just six months at the precocious age of twenty-seven but then spent nine years having the book rejected by publishers before it was eventually picked up by Galley Beggar Press. A Girl is a Half-formed Thing has since gone on to receive a number of awards, including the 2014 Baileys Women’s Prize for Fiction.

In her grasping, stuttering style that harkens back to James Joyce, McBride’s unnamed narrator recalls the unsettling story of her life from birth to the age of twenty: absent father; uncompromising, pious mother; elder brother with a brain slowed by cancer in early childhood; an uncle who rapes her at thirteen; the discovery that sex (rough and bloody: ‘Push it up. Me. I am dry and blind. While he goes on. Crushing all my bones’) can distract from more insidious traumas that leave no visible wounds. It’s a book that grabs and shakes you from start to finish.

That it took nine years for A Girl is a Half-formed Thing to find publication is disappointing, though not surprising. Many of those books we now consider classics share similar stories of rejection, including L. M. Montgomery’s Anne of Green Gables (1908), James Joyce’s Dubliners (1914), William Golding’s Lord of the Flies (1954) and even J.K Rowling’s Harry Potter and the Philosopher’s Stone (1997). Not to mention those female authors—among them the Brontë sisters, George Eliot and Zelda Fitzgerald—who were pressured to publish under male pseudonyms.

These literary novels are well worth reading; to make sure experimental titles are published, it is up to us, the readers, to create a demand for these books.

In a recent commentary for The Age, Aviva Tuffield, executive director of the Stella Prize, discussed the anecdotal evidence that while women and girls generally read books about protagonists of both genders and by female and male authors, boys and men are likely to largely read books written by and about men. Tuffield argues that when men limit their reading in this way, ‘[they’re] not simply getting half the story, [they’re] getting a distorted one.’ But the problem isn’t just limited to men. I follow a large number of book blogs authored by people who consider themselves serious readers. However, many of these reviewers only read within single or limited genres, which to my mind is equally dangerous.

Those who have seen the 2010 film Catfish will be familiar with the proverb of the catfish and the cod, included in Henry W. Nevinson’s Essays in Rebellion (1913): fishermen shipping cod found that their cargo arrived at port ‘slack, flabby, and limp’. To solve this problem, one fisherman placed a catfish in each tank with the cod, ‘for the catfish is the demon of the deep, and keeps things lively’. Consequently, that fisherman’s cod ‘came to market firm, brisk, and wholesome.’

When we limit our reading to one or two genres we become the lethargic codfish, as each genre has its common tropes, stock characters and basic plots. If readers choose only these ‘comfortable’ narratives, we shift from actively engaging with texts to passively consuming them. It’s akin to interacting only with people of our own gender, class and way of thinking. While this may be reassuring and self-affirming, it quickly makes us complacent.

Books like A Girl is a Half-formed Thing are the catfish that stir and stimulate. Fiction’s great power is its ability to lift us out of our own experience and into the lives of others. It introduces us to new ideas and perspectives, inspires empathy and broadens the scope of our imagination. Most importantly, it causes us to question our beliefs and worldview.

I’m not alone in this opinion. Eleanor Catton, author of Man Booker Prise winning novel The Luminaries (2013) believes reading is the ‘first step’ in the writing process, and that if our reading culture is ‘dynamic, diverse, and informed, our writing culture will be too’. To this end she has recently announced a grant that gives writers time to read.

So the next time you visit a bookshop, take a risk. Pick a book you can actively engage with—something provocative and unsettling and challenging. Get out of your comfort zone. And if you haven’t yet read A Girl is a Half-formed Thing, it’s a great place to start.

One thought on “Reading beyond the comfort zone”