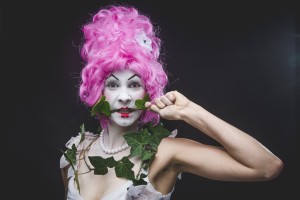 Madame Nightshade’s Poison Garden left the audience waiting in their seats, while a path between Twistees, cream rice and Mars Bars became our exit. This show had the messiest ending I had ever seen in a theatre performance. Anna, or ‘Madame Nightshade’ put on a spectacular show, utilising physical comedy to make the audience both cringe and laugh at the same time. I was bewildered from the beginning, feeling like I had been pushed headfirst down a rabbit hole.

The set was endearingly beautiful. It was covered in beautiful fake vines, an outdoor table and chairs set, a rubbish bin, some rubbish and even some deadly weapons made of vegetables. It gave the feel of being in a personal garden, like we had been transported into Madame Nightshade’s own home.

Despite feeling like we had been invited into her home, both myself and the friend who was with me felt a little disconnected from the world at the beginning. It was such a different world to be thrown into, so it took a little time to adjust. But as the show went on we both got more and more immersed in the world, the story and the characters. By the end of the performance I was glad it was over, but only because I couldn’t see how the set could get any messier than it already was.

I wanted to know more. It was a wild ride, which turned out to be a completely different interpretation to what my friend had gotten. The most exciting part about the entire show was the changing of characters within one character. I was never entirely sure whether the alternate characters and their stories were just a fragment of Madame Nightshade or an entirely different character. Normally I would put that down to poor acting, but that was not the case here. I felt like I was watching a child’s imagination rolling out before me. I was fascinated by the childlike qualities of the character and the way this was interpreted into an entire show with audience participation, disgusting use of food and murder.

One of the only issues I had, and it was only quite a small part of the show, was the use of vegetables as weapons. The concept itself was quite clever; creating a bazooka, a grenade, a pistol and a rifle entirely out of vegetables. It was a quirky idea, and I was really impressed with the creations, but it was, in my opinion, a little insensitive. There has been an increase in gun related violence in the past few years and it’s important to note that, despite being quite far away from America where most of the incidents have occurred, we are so connected to them by the internet that it is still quite an impactful topic to joke about. I also had a similar issue with a small piece of casual racism in the form of a ‘samurai’ style dance that made me a little uncomfortable.

Overall, I had an amazing time listening to stories of murder, adventure and some downright strange things. I would recommend it to anyone that can stomach sloppy eating.