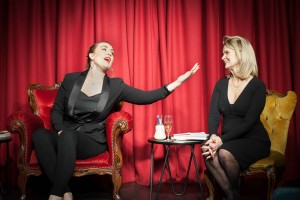 If your vagina got dressed, what would it wear?

If your vagina could talk, what would it say?

Stepping into the bar at The Butterfly Club, my vagina, dressed in Melbournian comfort chic, was happily humming in anticipation of the night’s show, ready and waiting to be coaxed with deft works and a welcoming smile. The hazy glow of pink lights and the warm, spicy musk of mulled wine were the perfect lubrication to ease into an evening of both sexy delight and slow-burn reflection with Nice Productions’ local rendition of The Vagina Monologues.

Living up to its name, The Vagina Monologues is a series of speeches, stories, rants, and soliloquies strung together by the common central theme of the vagina, each little monologue act inspired by talks and interviews with women. Ranging from hilarious rants, to thought-provoking poetic reminiscence, to heavy, potentially distressing tales, The Vagina Monologues initiates a dialogue on the constraints and torments imposed on women and the symbolic and physical aspects of their sex and sexuality.

Written and first presented in 1996, The Vagina Monologues is unlike your standard theatre performance. It can be performed by as many or as few actors as desired, and with an ever-increasing list of acts to choose from, every production of the show prompts, delivers and adds new nuance and introspection on the status and symbolism of female sexuality. On the cosy stage of the Club’s theatre, against the backdrop of a lush red curtain, the three leading ladies of our Melbourne production deliver this pounding dialogue with the perfect combination of force, impact and tender, loving gentleness. Moving rhythmically and fluidly between the different grooves and lines within the pulsing, vigorous channel of stories and explosive rages featuring the vagina, they open up the floor with an unrelenting catalogue of vaginal euphemisms then thrust straight in, rocking the audience’s core with explicit and unapologetic tales and dramatic monologues of women and women’s pleasure and pain.

One-sided conversations describing the physical and mental journey of orgasmic discovery in vagina workshops and through sexual relationships are performed side by side stories and recounts of sexual force and manipulation by both known and unknown faces without hesitation. Timbre, expression and language change to reflect the voice and emotion coming through each narrative monologue, portraying the genuine effects of social, cultural and political censorship on the mental health and physical wellbeing of the everyday woman. At the centre of the Melbourne production, three particular themes can be distinguished, each embodied by each one of the ladies commanding the room with their voice and gesture.

Ripping the panties off society’s insistence on controlling and regulating the vagina, the loudest of the themes resonates with outrage and delights in the satisfaction of defying societal restrictions on the feminine sex, frankly and hilariously endorsing vaginal love. More quietly, the second identified theme focuses on sexual self-discovery, the poetry of its words belying the overflow and excitability of emotions of women learning about their vaginas, their bodies and themselves, and revelling in the sensuous carnality of their physical natures. Finally, the last theme delicately guides the audience down the unsettling and darker side of women and sex, where the torn and ravaged vagina becomes the symbol of feminine pain and anguish.

Relevant as these stories and themes remain today, The Vagina Monologues nevertheless shows its age, with many of its monologues thrumming violently with the fury of the second wave feminism of the later 20th century. Although the writer of the Monologues adds a new act once a year to reflect evolving contemporary social and political issues that continue to be pushed up in and against vaginas, the main features of the show notably lack the multiplicity of representation that embodies today’s intersectional feminism. In particular, the strong emphasis on the connection between vaginas, and sexual pleasure and womanhood, remains ignorant of the growing understanding of the fluid nature of gender, erasing, or at least side stepping, expressions of femininity and identification with womanhood across the non-binary spectrum. In a similar vein, those orientated within the spectrum of asexuality may struggle with the heavy focus on fierce and personhood-defining sexuality, particularly as much of the dialogue centred on the expression of joy and wonder in the discovery of the erotic and philosophical ecstasy of the vagina.

Nevertheless, The Vagina Monologues deliciously rubs in just the right way, striking the sweet spot for women desirous for a loud and clear voice to cry out their pleasure and their pain. Throughout the performance, interspersed between these solo accounts and lyrical soliloquy, The Vagina Monologues goes as far as to demand the audience to reflect upon their own relationship with vaginas, shooting off question after question to arouse further discussion and examination of the experience of the everyday vagina in the gripping world of our patriarchal society. With a climax that echoes off the walls, anyone in the mood for a giggle, a socio-political tickle, and maybe a few aching gasps, The Vagina Monologues will be sure to keep you warm and wet with tears and laughter for the night.