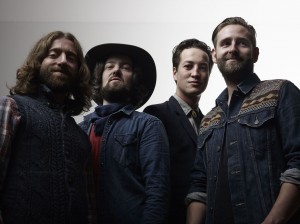 The Beatles – just saying the name of this iconic band makes my spine tingle. To this day The Beatles continue to inspire music lovers and music newbies alike across the globe. I grew up with them as an integral part of my daily life, and have since tattooed two of their songs onto my arm and back (Let it Be and Within You Without You) and I have no doubt that I will be playing their albums for my kids and my grandkids. It’s a no-brainer.

The Beatles‘ sixth and seventh albums, Rubber Soul and Revolver, are getting a live revamp in the Rubber Soul Revolver tour which you can catch starting in Brisbane on July 30th and ending in Sydney on the 7th and 8th of August. The two albums will be performed back to back by 17 musicians including Husky Gawenda, Jordie Lane, Marlon Williams, and Fergus Linacre. This is one show I know I won’t be missing.

I had the chance to chat with Husky about how he got involved with the project and about what The Beatles mean to him.

First tell me a bit about how you got started in music and about your journey in the industry so far.

I started when I was a kid, singing with my mum and sister and then my cousin Gideon who I still work with in Husky. In 2011 Gideon and I recorded our first album in a bungalow in my back garden. To our surprise it was released in Australia, UK, Europe and the USA and took us touring all over the world.

What made you get involved with the Rubber Soul Revolver show?

Touring the country with a 17 piece band singing Beatles songs in beautiful venues with three great singers  – it was a no-brainer.

What about The Beatles inspires you the most and what do they mean to you personally?

I grew up on them, so they bring back a lot of memories of being young and blown away by their songs. They were also some of the earliest songs I learnt to play and sing. Their songwriting was staggering. They wrote great songs, very eclectic, their style developed and changed, and they wrote so many in a fairly short time. They basically changed the world when it comes to popular music and songs.

What has it been like practicing and collaborating with other musicians who are passionate about The Beatles and the Rubber Soul Revolver project?

Working with other great musicians and singers on material that everyone is excited about is pretty much the best thing in the world.

Why do you think The Beatles still resonate with audiences even though it’s been decades since their last album was released?

I think they had an amazing ability to touch on universal, human things that we can all relate to irrespective of time or place. Whether simple or complex or catchy or sweet or weird their songs were always so relatable.

Do you think it’s important to continue the legacy of The Beatles and if so, why?

I think it’s important for everyone to experience the Beatles. I believe in the art of song and music and I think the Beatles are one of the most important bands ever. I reckon the generations to come should hear these songs – whether for education or for pure joy.

What do you hope audiences walk away with after Rubber Soul Revolver?

I hope that we can bring these great songs to life for them. That is always the aim, to bring songs and stories to life. I’m usually doing that with my own songs, but this time I have the pressure of bringing some of the greatest songs ever written to life. You don’t want to mess that up!

What are your plans after finishing up the Rubber Soul Revolver tour?

I’ll be based in the northern hemisphere for the rest of the year touring Europe and America and writing for my band Husky’s next album.

What have you learned throughout the process of Rubber Soul Revolver that you will take with you in your own musical career?

I’ve been studying the songs very closely to prepare for the shows. Studying the Beatles for a musician is like studying Shakespeare for a writer, or Einstein for a physicist – you’re learning from the best.

And finally, the hardest question of them all, what is your favourite Beatles song?