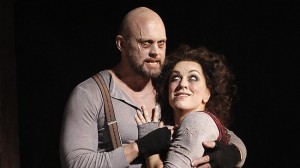 Sweeney Todd, the finale of Victoria Opera’s Sondheim trilogy, is a hair-raising Victorian-era tale. A homicidal barber, Sweeney Todd is blinded on a quest for revenge against the callous upper class society. He slits the throats of his clientele with the help of his seductive accomplice who bakes the victim’s flesh into pies. This gothic musical thriller is a dramatic and ghoulish period piece: a dark urban myth that’s been passed on for centuries.

The performance encompasses a fusion of opera, operetta, musical comedy and has its share of romantic rendezvous. The gloomy ambience and enthralling atmospheric lighting enlivens the stage and focuses on even trivial engagements the common townsfolk are engaged in. Sturdy wooden beams, stairwells, walkways, dreamy docks and balconies give a highly accurate depiction of industrial Victorian London. Right at the centre lies Lovett’s infamous pie shop with a dear signboard. On a level above, Todd’s barber shop gleams with shiny razor blades, dingy trunk cases and the atrocious death chair where victims are slashed mercilessly.

The streets of the dirty, uncouth Victorian London are filled with grisly injustices. Poverty rules the turf with suffering and a pathetic state of being. The rich dominate with their cruel atrocities and the poor are punished with blood and gore prevailing. It’s reminiscent of present days, where the society is still ruled unlawfully by the affluent.

The ‘demon barber of fleet street’ returns to London to avenge the death of his destroyed family. Teddy Tahu Rhodes’ performs as Sweeney Todd, awing the audience with his deep, powerful voice. What first starts as a plot of revenge grows on to become an automated, barbaric instinct to kill. The psychopath barber strays from reality and stops at killing none. His grim, monstrous appearance set the mood of the act gloriously but his performance fell flat at times. At the climax of the act, Rhodes’ could have relayed a deeper emotive ability. The despondency he should have felt as he led to his own downfall was not clearly portrayed.

Mrs Lovett accomplices Todd on his deadly missions with lust on her mind. She lets him slash the throats of his clientele on the barber shop above her establishment. The bodies slide down a chute to Lovett’s pie shop where she minces their flesh into pies with a greed to increase business. Antoinette Halloran as Mrs Lovett delights the audience with her quirks and hilarious dark humour. Halloran stole the show with a perfect performance, bagging everything from comical ‘Worst Pies in London’ to scintillating and dramatic pieces. Lovett’s desperate attempts to win over Todd’s affection, the endless tirade of seduces and gruesome vanity as she checks her reflection on a butcher’s knife are strikingly distinctive character traits.

The supporting performances played a stupendous role. Blake Bowden and Amelia Berry are young lovers wrapped up in their new found love for each other. Their performance sent flutters with their stark purity and innocence contrasted to a melancholic time of morbidity. Amelia Berry plays Johanna, the lost daughter of Todd who has been imprisoned ‘like a caged bird’ all her life in Judge Turpin’s house. Her performance shifts brilliantly from a graceful, innocent girl craving for freedom to a slightly kooky character as she’s thrust into an asylum.

Ross Hannaford as the orphan boy, appears as an oblivious teenager keen to please and gain solicitude. His effervescent personality teamed with dynamic acting skills and frisky singing spurred admiration. Kanen Breen as Beadle Bamford tickles a laugh in the parlour scene where he sings zealously without knowing that he’s just a few minutes away from death.

Dimity Shepherd as the outcast beggar woman is unrecognizable with her grubby garb and crazy antics. But behind the rags and flakiness, blooms a wonderful voice filled with vitality. Her performance crescendos and ends when Todd puts an end to her shenanigans without knowing that the destitute is none other than his lost wife.

With blood-curling surprises lurking around every corner and sinister horror that brings out the most gruesome Victorian imagination, Sweeney Todd is a power packed, fantastic melodrama. The lurid gore adds layers of tension and delicious intensity to the scenes. With the piercing blow of the factory whistle and very realistic blood splurged after a victim is slaughtered by the demon barber, I couldn’t help but wonder if this was one of those absurd life-like horror movies where people actually die for real on stage. The archaic text, decorum and exquisite Victorian raiment adorned by the cast transports you to another world.

The orchestra was spot on, lulling the audience with entrancing tunes. The music often contrasted the acts. As a tense performance is played, the orchestra eases the atmosphere with a comical or harmonious note, maintaining a flawless balance. The most alluring part of the performance is the high-pitched chorus sung by the cast. The powerful ballad is sung in intervals through the performance in beautifully synchronized vocals, relaying the plot and action.

The catchy lyrics and music got me humming the electrifying ballad many hours after the show. Stricken by the unsettling Victorian tale and haunting songs, the performance didn’t fail to raise a good amount of gooseflesh.  Sweeney Todd’s tragic gothic horror left me thrilled, yearning for more.