tales of a time-travelling songstress: interview with bobbie-jean henning 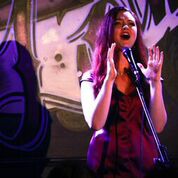 Image courtesy of The Butterfly Club

Music theatre graduate Bobbie-Jean Henning is bringing her debut cabaret show Tales of a Time-Travelling Songstress to Melbourne’s The Butterfly Club on the 27th-31st of May. I caught up with her before her five-night long trip down musical theatre lane, and found out what makes this talented lady tick.

What inspired you to study musical theatre?

I knew I wanted to be a performer, there wasn’t anything else I could imagine doing everyday. But I loved both acting and singing and couldn’t decide which to study so I found a way to do both.

What do you love most about performing?

How freeing it is. To be able to express emotions in ways that might seem unacceptable or that you wouldn’t normally experience is so liberating. And it’s so wonderful being able to really connect with people.

What is the inspiration behind A Time Travelling Songstress?

I’d been trying to write something for about 6 months but every idea I started always ended up hitting a wall. Then I was sitting on a flight from Perth trying to figure it out and suddenly the whole concept for the show came to me. I hardly slept for the next two days- my mind wouldn’t stop reeling.

What challenges did you face in writing and developing the show?

The hardest part is really that it’s been a solo project. I’m so used to working in a team, so staying motivated when I was the only person I could let down was hard, especially when there’s been set backs and rejection. I came into it as a performer but now I’ve been a writer, director, editor, publicist, graphic designer, stage manager, promo girl, costumer, producer and everything in between!

What do you hope audiences walk away with after your show?

What are your plans for the future of the show? Any other ideas in the works as well?

I’m hoping to put the show on in Sydney next and who knows after that! I feel like my character Kittie has a lot of adventures still to have and hopefully keep growing and developing. I’m also working on some other projects with some friends at the moment. Just staying creative and trying to make work that I’d like to see.

What has been your favourite place to perform so far and why?

Ooh it wasn’t a significant performance but I remember in high school, performing as part of an evening choral festival in this epic, old church in Brisbane. The architecture was stunning and it was all candlelit. Singing with hundreds of other voices in those acoustics were amazing.

What are your favourite singers/songs to perform?

A lame answer but I love pretty much every type of music. I think that’s reflected in the show as I’m singing everything from jazz standards to pop songs, folk tunes, even a smart yodel!

What a creative talent. Be sure to get tickets for this one!