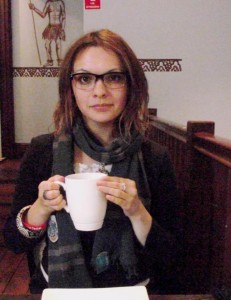 The Bookshelf Diaries takes a peek into the reading life of writers, readers and book lovers. Today, Carissa Lee Godwin lets us in what inspires her and what makes her mad.

The Bell Jar by Sylvia Plath. I first read it when I was 16, and loved it on a morbidly poetic level, and it inspired me to write, but I didn’t fully understand the essence of it. It was the same when I re-read it at 19, but it had an added sense of foreboding at the tragedy of not knowing what to do for the rest of my life. But once I re-read it at 24, I finally got the point of it, and it was the greatest lesson I’d ever learned.

What have you recently read that was un-putdownable?

The Fault in Our Stars by John Green. I was keen to read it before seeing the film, and had previously been on a slow trudge reading-wise. TFIOS was a great, light easy and yet harrowing read that I finished in a day, and had me a little teary by the end.

The Language of Flowers by Vanessa Kannavaugh. I had a tumultuous relationship with the book. My boss loaned it to me, and while I was reading it, I was so angry at the main character, and couldn’t understand the things she was doing to the people who loved her. But, like The Bell Jar, I wasn’t in the right place in my life to understand what she was going through. Until about this time last year, it hit me. I think it’s time to re-read that one again.

Which is just the tip of the iceberg, really!

There have been a few. It’s been a great year for reading for me. A loved one got me into reading?more than I had been for a while, and one recommendations was The Name of the Wind by Patrick Rothfuss. I’m not usually a big fantasy reader, but Rothfuss is a bit of a genius. I’m just about to start his second in the series The Wise Man’s Fear.

However, the two books that have influenced me the greatest were 1984 by George Orwell and Brave New World by Aldous Huxley. I decided to read them consecutively so I would be able to compare them, and it was a bit of a brain-food overload, but I recommend everyone read them both one after the other. Orwell first, then Huxley. I’m still wandering around in some book-hungover funk, pondering the meaning of life and humanity.

Is there a writer that has influenced your writing?

My mum read Shakespeare to me a lot, and I later explored his plays and sonnets throughout my school life, and obviously when I studied acting at uni. I aspired to mimic his style from such a young age, and later in high school it was both Shakespeare and Plath that influenced my writing.

During my time at uni, I discovered a myriad of playwrights that impacted me such as Wesley Enoch, Sarah Kane, Andrew Bovell and Jack Davis to name a few. Also Huxley and Orwell have been recently added to the list, since taking over my brain. I’ve never been so inspired to write. So many great writers in the world, it’s both inspiring and devastating.

In bed. On the train. Sometimes outside in a garden.

The Story of the Miracles at Cookie’s Table by Wesley Enoch. It’s a bit of a rough play, but it’s a fantastic read and such a great book to revisit particularly when trying to create characters. The Making of a Sonnet – the Norton Anthology is really good to get creative juices flowing when dealing with writer’s block.

And it sounds strange, but Frankenstein by Mary Shelley has always been a great book to pick up when feeling creatively stagnant. People don’t realise what a hard life she had, with a tumultuous marriage and deaths in her family throughout her earlier years. It’s wonderful that she was still able to create this historical masterpiece of a grotesque, beautiful and tragic world representing the imminent fall of mankind.

Carissa Lee Godwin is beginning her role as ATSI Program Coordinator and Editor at the SA Writers Centre, as well as working as a professional actor and voiceover artist. This last year she completed an editing traineeship through the Black and Write Indigenous Writing and Editing Program in addition to working as an online journalist alongside Lou for the 2014 Melbourne Writers Festival. Follow Carissa @rissless on Twitter or check out her blog here.