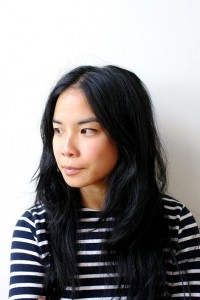 The Bookshelf Diaries takes a peek into the reading life of writers, readers and book lovers. Estelle Tang reveals her favourites, her inspirations, and her ‘to-buy’ list.

What are you reading right now?
Wayne Koestenbaum’s My 1980s and Other Essays.

Where did you buy it?
The Strand Bookshop in NYC.

What’s in your to-read pile?
Roxane Gay’s An Untamed State, Emma Straub’s The Vacationers, Karl Ove Knausgaard’s My Struggle (Vol. 1), Leslie Jamison’s The Empathy Exams. Plus I have a list of books to buy when I get home to Melbourne later this year, including books by Michaela McGuire, Liam Pieper and Jessie Cole.

What’s the best book you’ve read in the past year?
Yikes! Recently I read and loved Susannah Cahalan’s Brain on Fire, a memoir by a journalist who descends into psychosis that doctors can’t find a reason for. I though Karen Foxlee’s The Midnight Dress was superb and it made me miss Australia a lot. Samantha Irby’s Meaty is a hilarious book of bloggish personal essays. Also, I finally read Teju Cole’s Open City, which is just gorgeous. I reread a whole lot of Lorrie Moore this year too for a review, which was a pretty great experience that I can recommend.

Where do you like to read?
In bed, which is ridiculous because I inevitably fall asleep. I also really like reading on the train or any form of transport. I know it’s romantic to read outside or at a café but I don’t really like doing either of those things: I find the wind really annoying (or the sun, if I’m reading on an iPad) and I feel stressed at cafes, like I have to keep buying cake.

What’s your favourite book of all time?
Oh, no. Um…I read Jane Eyre at a really formative time; I think it was one of the first adult books I read as a kid, and her morality and self-sufficiency always stuck with me. Then when I studied it later in life, it became a window to feminism and postcolonial small-p politics, which was not comfortable but is, I think, what classic literature can be good for.

What do you read to feel inspired?
I am inspired by my peers’ books, whose life experiences and writing skill persuade me that writing is a worthwhile exploit. I like personal and literary essays, learned disquisitions with personality. Lately I want to read more poetry for the acrobatics and joy of language, and it’s a mode I don’t have enough familiarity with.

Estelle Tang is an Australian writer, editor and literary scout living in NYC. She is a staff writer for Rookie and the founder of #pitchbitch. Follow her on Twitter at @waouwwaouw.