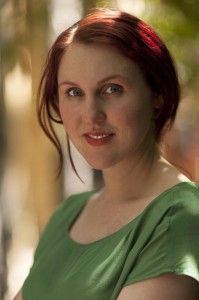 The Bookshelf Diaries takes a peek into the reading life of writers, readers and book lovers. Today,  Lorelei Vashti allows us insight into what she (and her six-month-old daughter) are reading.

Mostly picture books! My daughter is almost six months old and she’s really engaged and looking at everything around her and wanting to touch it all (and put it in her mouth). We have so many fantastic kids’ books that people gave us. Our favourites (okay, my favourites—she doesn’t care what we read to be honest) are Jon Klassen’s I Want My Hat Back, and Henri’s Walk to Paris, illustrated by Saul Bass. This to me is one of the best things so far about being a parent: getting to discover so much new, cool stuff through your kids.

As for ME-me, the book I’ve picked up recently is Loitering with Intent by Muriel Spark. It is strange and funny and brilliant (and short, which is helpful right now!), and I’m really enjoying it.

Was there a book that first interested you in writing?

Does everyone say Roald Dahl? Because for me, as well, it was Roald Dahl. All of his books had a huge impact. I remember typing out, on our new electric typewriter, the entirety of James and the Giant Peach when I was about ten. Was I practising my typing skills? Or pretending his words and sentences and stories were coming out of my own brain and expelled through my fingertips onto the page? Whatever it was, it was really enjoyable. Imagine if you could do this as a job!

What was your favourite book as a teenager?

Franny and Zooey. I discovered it when I was 14 and the tone of it was so literate and intriguing; unlike anything I had ever read before. All those long, smart sentences! It had the perfect amount of teen angst and big words, but also a soupcon of spirituality that attracted me greatly at the time. I’d also read in Smash Hits or somewhere that my favourite actress Winona Ryder recited a monologue from it for her first Hollywood audition when she was 13, and I wanted to be an actor too. I used to read it over and over, trying to guess which part Winona had picked for her audition.

Have you ever met a favourite author?

I had the weird, awkward experience of seeing a favourite author on the street and pulling out her book, which I was carrying in my bag, and waving it in front of her face to prove that NO, I REALLY, REALLY DO LOVE YOU, SEE, I’M CARRYING THE BOOK YOU WROTE! But it wasn’t even just a normal copy of her book; it was a copy she’d recently signed for me at the Melbourne Writers’ Festival.

Anyway, the author was Elif Batuman, her book was The Possessed. I had just arrived in Istanbul and was walking down the main street when I saw her walking with a friend. I chased after her. Yup, I was a scary, manic fan that day.

What have you recently read that was un-putdownable?

Liam Pieper’s The Feel-Good Hit of the Year. My daughter was three weeks old when I read it and it was pretty hard to take my eyes off her face because I was absolutely obsessed with her. But, goddammit, turns out I was even more obsessed with Liam’s book and finished it in a day.

Books with spelling mistakes make me mad! Or any of those other editorial bugbears: rivers of white space, widows and orphans, grammatical errors, you know what I’m talking about.

It was without a doubt a book written by Grantly Dick-Read in 1951 called Childbirth without Fear. It completely changed my mind about labour and birth and helped me prepare for it in a rational, sensible way rather than with the terror I was inclined towards. He writes in a way that is so readable even now, and he’s so rational and sensible about the whole situation that you can’t help but feel like he might be right—that tension causes pain, so the most sensible thing to do is to learn what’s going on in the body so you don’t have to fear it. I read that book twice during my pregnancy, and it was immensely helpful and valuable.

If I want to feel inspired about words I just open up Proust and turn to any page. I know that makes me sound like a total wanker but it’s true. Any page at all—an instant language high.

But I also secretly love self-help books and books about creativity and process, and I have a whole bookshelf full of them. I particularly love Twyla Tharp’s book The Creative Habit. She’s a choreographer and dancer and you might wonder what she can teach you if you yourself are neither of those things, but it turns out the answer is: a lot! She basically reminds you about discipline, and she goes on to give you some great ideas about how to buckle down and get stuff done. She also talks a lot about Billy Joel, which is fun too.