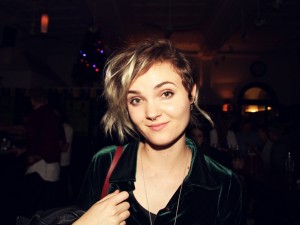 The Bookshelf Diaries takes a peek into the reading life of writers, readers and book lovers. This week, editor at Scum Mag Sam George-Allen exposes her literary loves.
What are you reading right now?
I’m finally reading a Junot Diaz novel – The Brief Wondrous Life of Oscar Wao. I’ve read his short fiction before but this is the first chance I’ve had to get properly into one of his novels and it’s just so good. I don’t speak Spanish at all and he uses so much of it in his prose – I love it. Feels really immersive.
What’s in your to-read pile?
The Satanic Verses by Salman Rushdie, The Cat’s Table by Michael Ondaatje, The Autograph Man by Zadie Smith.
Was there a book that first interested you in writing?
It’s hard to pin it down to one. I read a lot of Roald Dahl in my early childhood along with Tolkien and J.K. Rowling and a bunch of trashy sci-fi that my dad let me read, but I remember reading the Animorphs series and thinking “Oh, I could do this.” Probably because they’re pretty poorly written.
I also read Katherine Mansfield‘s short stories early in high school, and those gorgeously sad, powerful stories along with her own personal history – being a creative, solitary, pretty weird woman from New Zealand – resonated strongly with my angsty Auckland-based teen self. Writing still seemed romantic but also, suddenly, accessible.
What book changed your life?
I read a book called Only Forward by Michael Marshall Smith when I was a tween and it sort of shook me up. It’s spec-fic about time travel and dreaming and I haven’t read anything quite like it since – that really did change the way I thought about things like human consciousness and the experience of time. It’s not something I’ve ever written about but it makes its presence felt in my approach to other topics, I think – a little bit of crookedness. In a more concrete way, the Earth’s Children series by Jean M. Auel – this seven-book series of massive, bloated prehistorical pot-boiler romances – probably did a lot to shape how I approach sex and sexuality, believe it or not. They have super explicit sex scenes and I was reading them aged 11 or so, and the sex depicted was always very egalitarian and I remember understanding that that was how it ought to be (and so, by and large, it has come to pass).
More recently – The Silent Woman by Janet Malcolm really solidified my desire to write stuff like that: researched, considered non-fiction with narratives and characters. Malcolm is a huge deal to me.
Have you ever met a favourite author?
No, and I don’t know what I’d do if I did. I’m terrible around ‘famous’ people. Zadie Smith is my queen and I’d probably throw up if I got a chance to meet her.
Where do you like to read?
In the armchair in my office or lying on top of the covers of my bed with the windows open. It’s pure luxury.
What do you read to feel inspired?
Everything in the currently-unlocked New Yorker archives, and Zadie Smith. On Beauty is the most beautiful novel I’ve ever read. I go back to it regularly. She also writes gorgeous, carefully-tempered essays which are hugely inspiring to me as a (mostly) non-fic writer.