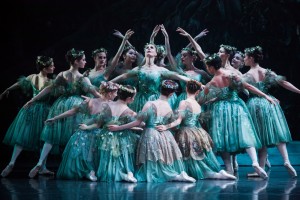 The Dream moves through three pieces by English ballet giant Frederick Ashton: Monotones II, which is a simple formalist modernist dance, Symphonic Variations which is a paired-back love story in Greco-Roman costume and Ashton’s surprisingly funny interpretation of a Midsummer Night’s Dream, simply named the Dream. While the performance is a masterful rendering of these historically important pieces, it sometimes left me wanting more. The dancers show incredible command of their bodies, but what they exhibit in physical prowess, they sometimes lack in emotion. And the main crowd-puller of the piece: the introduction of a male lead en pointe, is amusing, skillful and so subtle as to almost fly under the radar.

To me, the unifying thread of the evening was the skill of the dancers. The pieces called for a lot of synchronicity between dancers, as well as long periods on stage, and the performers responded to these demands with poise and control throughout. In fact, I have seldom seen performers with so much grace and mastery over their bodies. To me this skill was a double-edged sword, for example, the almost-abstract piece Symphonic Variation seemed solely about the skill of the dancers. I’m sure to ballet experts it was exciting, but to amateur enthusiasts like myself, this emphasis on skill alone fell flat. I wondered why the dancers had no facial expressions, I wanted someone to fall over so that something interesting would happen. I was far more entertained by the emotive and fast-moving the Dream, where the dancers’ skills allowed them to become excellent storytellers.

Across the board, ballet generally has very strict gender roles: the women move in certain ways and the men in others, the women wear girly things and the men do not, the women are en pointe and the men are not. This is why I was excited about the identical outfits that the male dancers and female dancer wore in the first piece Monotones II: despite the orthodoxy of the medium, the gender presentation of the dancers became more fluid for ten minutes, almost androgynous. They were bodies performing movement and relation, not gender stereotypes.

A frustration with gender stereotypes is also why I was excited about the assignation of pointe shoes to the (male) character Bottom. The dancer wore pointe shoes for the scene where the witless young man is transformed into a donkey and seduced by Queen Titania. Towering over the queen in pointe shoes and a giant donkey mask, the dancer pulled off the physical comedy superbly. And you have to hand it to him – 10 minutes on stage en pointe is difficult enough for female ballerinas let alone for someone who has trained his whole life without. But so much of the promotional material was centered around the innovation of a male lead in pointe shoes, yet from where I was sitting it was almost a blink-and-you’ll-miss-it situation. It really was one of the most exciting parts of the whole ballet – yet it was only one dancer and only for one scene.

The Dream is over for Melbourne, but it’s still playing in Adelaide on July the 8th and 9th. If you have $40-$250 lying around, you should probably go and see it. The binary of gendered performance certainly wasn’t smashed in the Dream, but compared to other traditional choreographers Ashton was practically burning bras. And the ballet won’t make you cry, but it will almost certainly make you laugh and marvel at the sheer skill of the whole thing.