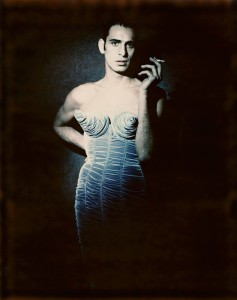 From the Sidewalk to the Catwalk, the Jean Paul Gaultier retrospective currently showing at the NGV International is to put it bluntly, pretty damned amazing. On entering the media preview, I watched a very pretty boy, in an elegant floppy black felt hat, denim overalls and studded black boots begin to cry and tell his friend ‘I am so overwhelmed.’ His rush of emotion was genuine and had a touch of the divine, and it was such devotion that, when one considers the commitment to the art of individual elevation on which Gaultier still remains so focused, seems so very justified.

The exhibit, which has already toured extensively worldwide before settling in Melbourne, is well crafted and expertly designed, treating the room as an opportunity for a further canvas, rather than a bland white backdrop. This exhibition is an immersive experience, and it was clear that Gaultier himself was personally involved in the staging, as the lovingly intricate touches to the displays were risqué, and in some places, completely absurdist. The show thrives on far bolder moves than curators would normally dare to take alone, and the outrageously stylish curatorial team that Gaultier bought with him from the Montreal Museum of Fine Arts had an air of playfully joyousness which was refreshing.

The most surprising, and in some ways challenging aspect of the exhibit is the digitally animated mannequins. Reminiscent of the sculptural work of Tony Oursler, they are perched throughout room upon room- each with a different theme and aesthetic- of crafted couture. Designed specifically for the exhibition, digital projection mapping allows a select few of the models to express themselves, and some even interact with one another. While they unfortunately hold completely static poses, their inclusion adds a quirkiness and intrigue to garments which might otherwise have hung perfect but lifeless, as fashion can tend to in the sterile confines of a gallery. I watched mannequins have a conversation about social anxiety, lamenting that it was easiest simply to smile and not move in awkward situations. They spoke of being incredibly bored, and wishing people were more daring how they chose to present themselves. I was completely floored by this. Jean Paul is truly a designer who loves people, and not only loves them, but tries to elevate the individual experience to the extraordinary. He perhaps more than any other designer, is incredibly focused on willing the audience to discover how they wish to appear for themselves, and most importantly, to be unfettered by essentialist gender rules. The over-riding message I took from the exhibition is to be whatever it is you want to be- not just in how you dress, but in how you are in the world. 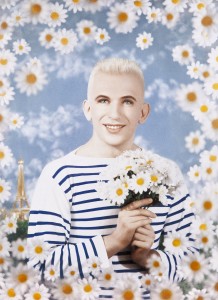 While Gaultier shuns the label of artist, accepting only the term artisan– a distinction that to some may seem pedantic but which I wholly support- the level of conceptual integrity presented through the installation is second to none. An appearance by art world photography legend and shape shifter Cindy Sherman cemented this exhibition as truly high concept. Fashion in this instance, at the hands of Gaultier and the exhibition curators, has really given art a run for its money. The typical blockbuster exhibits in a number of key national galleries this summer are focused on fashion. While clothing design is an undeniably conservative choice as months long showcases for a contemporary art gallery, Gaultier has stretched the definitions of what is and isn’t wearable art for decades. While it can be a bitter pill to swallow in Australia, as the government increasingly slashes support for visual arts, it is fun to see a play between forms creating new boundaries of what we might define as contemporary art. Gaultier himself spoke sadly about how he had watched the world change to be focused on marketing, limiting artistic possibilities across the board. It is the dirty secret that nobody seems to talk about. As we pretend that artists are still permitted the freedoms they once were, Gaultier exposes that lie by defiantly refusing to create ready to wear collections, too controlled as they are by the lucrative trend induced bottom line. Beautifully juxtaposed with the deathly opulent vacuum that is Carsten Holler’s reflective gold carousel in the NGV foyer, From The Sidewalk to the Catwalk goes beyond the bored posturing that has infected the art world. I haven’t been this excited at an exhibition since the Mike Kelley retrospective I saw in LA earlier this year. They both devoted their entire lives to allowing opportunities for others to overcome fears regarding their own corporeality, their own flesh and bones. True art invites us to live up to our role as a container for all the riches of a soul- Gaultier beckons you onward, like a naughty Dionysian, with a cheeky wink and perhaps a flash of skin- it would be folly not to follow.

Gaultier has carved a lifetime out of queering and blurring the lines of acceptable and unacceptable, bringing apocalyptic neo-punk and futuristic ghetto-isation to the common vernacular. He plays with ethnic symbolism in such a way that few dare- appropriation that in the work of another designer might be an offensive tokenistic gesture, in the hands of Gaultier seems representative of an appreciation of colour, form and the power inherent in the structure of a garment and its cultural symbolism. The origin of his many influence become another patchwork in what can be read as a global overview of body adornment, which borrows, plays with and references many cultures and periods of human history.

Fetishism and a play between sexualised power is a dominant theme- in one instance, a male mannequin in head to toe leopard print and mask, proudly grasps a similarly fur enrobed dildo. Many other mannequins besides of women proudly baring jewel encrusted pubic regions, sequinned breasts and asses augmented with finely accentuated fabric cages, smack of sexual exuberance and pleasure. The clothes really leap out as a celebration of the body, not as a method of covering or containing it. There is a sense, of opening up, of being proud and fearless. Overcoming body and gender shame is very strongly communicated throughout the clothing, the exhibition design, and numerous quotes from Gaultier himself. In interview before the exhibit’s unveiling, Gaultier and French curator spoke with Andrea Agnosto the Australian trans-gender model whom Gaultier hand chose to become his new face of the rising pro-social queer perspective. Gaultier’s choice of Agnosto as muse caused ripples around the world and aided in bringing trans-genderism, which had oddly remained largely ignored within the fashion industry, onto the global agenda. This alone is worthy of extensive praise, but through the exhibit one really gets a sense of just how influential Gaultier has been for the last 38 years. 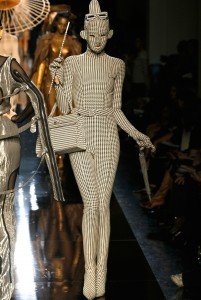 It is not often I praise an exhibition so highly, but if you are not in Melbourne I highly recommend splurging for the cost of an airfare. If you have any interest whatsoever in how you dress, the media representation of body image, gender diversity, photography, fashion or sculpture. If you have a creative bone in your body, or even if you don’t, then you must see this show.

If you are an artist or designer this show will push you to try harder. It will compel you to resist your own limitations, or to stop giving yourself excuses for why you can’t achieve the work you wish to achieve. You will see more clearly how cultural, sexual and economic repression impacts upon your self-image, and in turn your practise.

I challenge anybody who visits From the Sidewalk to the Catwalk to be unmoved to explore a freer, wilder version of themselves. Gaultier does not demand it, but he certainly makes it feel much more possible, and perhaps even more importantly, damned more fun.