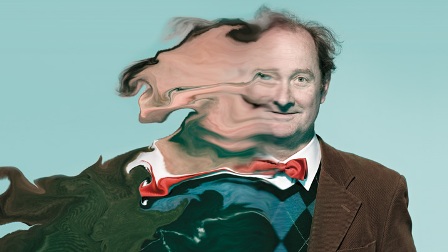 John Doyle is probably best known to many as Roy of Roy and HG fame. That’s certainly how I knew him, although I won’t pretend to be that familiar with the world of sports comedy. Nonetheless, I was looking forward to seeing a play written by someone known to be so astutely funny. Vere (Faith) is just that: entertainment with insight.

Vere (Faith) explores the effects of dementia on the family and the individual. This is effectively achieved through the change of time in the play. Act one shows us physics lecturer Vere (Paul Blackwell) in the university staff room at the end of semester, the first stages of his illness already creeping in. In act two, Vere is dependent on his family, living with his son and causing chaos at his grandson’s engagement dinner.

Doyle is clearly intelligent and curious, and it shows in the script. There is a myriad of references to a myriad of different worlds: to works of art and music, to science, literature and theology. The main character’s name is inspired by Australian archaeologist Vere Gordon Childe. The speed of the characters’ interactions and their many quips can be hard to follow, but when they do work it’s wonderful.

Paul Blackwell injects into Vere the type of bumbling intelligence you see all too often in academia. His character works best when played off the rest of the cast, especially Geoff Morrell, who doubles as sleazy Vice Chancellor Ralph and the reverend Roger. Morrell’s dry performance of both his characters makes the best of Doyle’s humour, and contrasts nicely with Rebecca Massey. As the reverend’s wife Katherine she is overproud and overbearing; in act one, her role as fellow professor Kate is suitably energetic, and her response to learning of Vere’s illness is a touching moment. Yalin Ozucelik provides another such moment in the second half when, as Vere’s son Scott, he shares one last lucid moment with his father.

Matilda Bailey and Matthew Gregan are both fitting as students in the first half, with Gregan in particular stepping up in the second half as Vere’s grandson Michael, who is disgusted by Vere’s behaviour. Roger and Katherine’s daughter Gianna is (for the most part) clueless and gullible, traits that make sense even if they aren’t quite believable: she is a little too forcefully naive. On occasion, Gianna suddenly possesses anger towards her parents that isn’t maintained and doesn’t make sense, especially considering their shared religious beliefs and Gianna’s lack of sustained frustration towards them. The family does offer an interesting exploration of religion, especially in light of Vere’s obsession with the Higgs boson.

On opening night it was nice to see Doyle joining the cast for a bow onstage following their calls, as this is a strong play with a strong script. It is not perfect, but its sensitive depiction of dementia is touching, with the ending leaving one last mark.

‘Vere (Faith)’, a co-production with the Sydney Theatre Company, plays at the Dunstan Playhouse until November 2 before transferring to the Sydney Opera House. Running time is 2 hours and 30 minutes with interval. Tickets: Adelaide $25-$55, Sydney $55-$95.