celluloid relapse: bangarang! (or how I learned to stop worrying and love robin williams) 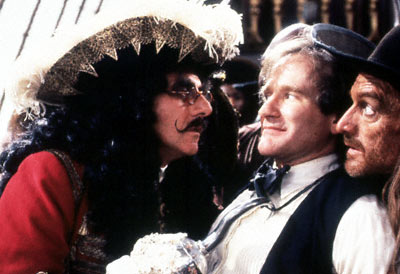 Bangarang is indeed a marvellous word. Owing much to an onomatopoeic appearance, to the unfamiliar ear it seems capable of almost infinite expression and unbounded use.  One can use it in journalese, popular music and especially, as Steven Spielberg’s Hook (1991) demonstrates, for unfair gang war scenarios between hungry orphans and drunk pirates.

Bangarang is language at its contortionist best, yet this facet of its being remains inadequately captured by our dear friends at the Oxford English Dictionary (OED). Once the exclusive privilege of Jamaicans, this expression has done what we’re all supposed to do when we reach an appropriate age: move out. Clearly too interesting for exclusive island living, it moved both regionally (presumably to American English) and even jumped realities, to Spielberg’s Neverland.

Bear in mind that this Neverland is a changed Neverland, at least in relation to J.M. Barrie’s first rendition thereof. Its distance from time and reality remain, but gone is its pronounced innocence. Captain James Hook did always harbour a pressing desire to kill dearest Peter, but never before were there visible courtesans, drunks and sadist behaviour on board his ship. Gone too are the narrative’s sexist and racist undertones; effaced simply as no mention is made whatsoever of Indians or expectations for Wendy to play mother. This is a different Neverland. It is logical that its warring tribes should have their own slang.

The bangarang of the Lost Boys is distinct from the original not so much in meaning, but in application. In the OED it is exclusively a noun, but in Neverland it takes on a life of its own, becoming apt for use in almost any situation or circumstance that could possibly warrant the expression of surprise, awe or battle related sentiments.

Were there some sort of advertising campaign designed to promote the use of bangarang (government endorsed, of course), the subsequent modification to the dictionary entry necessarily would have to expand to include the following:

Feeling belligerent? Bangarang! Why waste valuable time aspirating when in the midst of conflict? Using the latest military technology, bangarang will capably express sentiment – in conjunction with facial expression – and instruction to fellow squad team/army/gang members. How else could one expect to defeat an evil, hook handed foe?

Can’t quite find the words? Bangarang!  Tinkerbell, clearly a master of verbal expression, tells the Lost Boys the imperative for Peter’s Neverland, non-surgical version of Extreme Makeover and does so employing the ambiguous nuances of the fabulous bangarang. In the space of these few syllables, not only does she convey a sense of urgency and importance, but a huge margin of error for her unwashed colleagues. Failure indeed becomes more difficult if the target itself is not properly defined.

‘We have to make him… bangarang!’ – Tinkerbell

Impressed, feeling appreciative or just wish to convey a sense of encouragement? Bangarang!  War and unfortunate situations where cats have made off with tongues should not be the only opportunities for a valuable expression to work its magic. Bangarang functions in more situations in which positive sentiments yearn to be expressed. Whether your friend has just sliced an airborne (not on the account of swallow migration) coconut in two or more simply just likes the food they are currently ingesting, bangarang again saves the day.

Obviously, this inevitable entry should be written in the same style as the above text as if it were some odd species of crazed rug advertisement, but should the OED wish to conserve the general style and feel of their dictionary, bets have fortunately been hedged. Their entry should perhaps resemble the following:

One can only hope, and ardently so, that bangarang will find its way into common parlance. If such awful expressions as “gay” and “amazeballs” can nestle into daily use, surely ample room can be made to accommodate it. It is merely a matter of time.