challenging concepts: playing with the devil 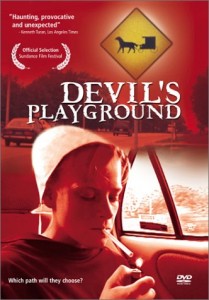 To say that the Amish community is isolated from civilisation is like saying that the Hulk has anger management issues. The Amish don’t have the modern communications and resources that somehow seem necessary to us Westerners (but remain superfluous in our daily functioning) and that’s a realisation that seems to drive us crazy.

Sadly it is their isolation that derives much of their stereotypes that fuel anti-religious comments against them. Aspersions such as ‘cult’, ‘entrapment’ and ‘not a part of our society’ often fly with heated flurry in our culture. Even ‘weird outfits’ and ‘funny beards’ are whispered almost as a social norm: they don’t dress like us, they don’t belong with us.  However these anti-religious comments highlight our own isolation from society as we strive to fling ill-informed comments rather than educating ourselves in our liberal community.

Lacking faith (pardon the pun), there is an almost comical portrayal of Amish folk in our movie genre. I’m talking the styled wigs, excessive beards and the cringe-worthy vernacular that belong at a theme park for the fifth staged performance of the day. It’s not believable and yet we eat it up like candy as the humour subserves as the distance mechanism.

It seems its Amish-impossible to have an honest serving portrayal of the Amish community without it focusing on the dividing differences between cultures. But praise the lord an Amish-miracle finally made it into Western cinema challenging the embedded prejudices.

Lucy Walker’s documentary Devil’s Playground follows the trials and tribulations of American Amish teenagers during the period of Rumspringa. Rumspringa is an Amish rite of passage where youths are temporarily given the freedom to experience life in the outside world and engage in otherwise ‘sinful’ behaviour. At the end of Rumspringa Amish teenagers have the decision to be baptised and join the church or leave to join the ‘English world’ and be shunned by their family and community.

It’s an idea which seems so far removed from our culture yet Walker exposes the intrinsic commonalities between our supposed clashing communities. As we follow the lives of Amish teenagers, their choices mirror those of Western youth: engaging in anti-social behaviours such as drinking alcohol and smoking, wearing make-up, experiencing romantic relationships, incessant mobile phone use and even shopping at the local department store.

It’s a surprising, yet refreshing, shock to see that the Amish community aren’t really as isolated as perceived. They wrestle with the internal conflict of discovering their identity while conforming to the pressures of their society and family – a concept not so far from the Western period of adolescence.

The film-making is simple, yet brilliant. There are no caricatures of ‘weird hats’ or ‘funny beards’ or emphasis on the abstract language of Pennsylvanian Dutch. Walker captures the wrestling pressures of adolescence in a community where the consequences are far greater than our own. There is a looming conscience of being a good role model for siblings, the idea of not being a part of a close-knit community and even the thought of not getting into heaven. It makes the dramas of our rebellious youth seem so trivial in comparison.

While it drives us crazy that the Amish community are not as inter-connected with technology as our own, the documentary almost comments that it is this dependence on communications that creates unnecessary turmoil. Could it be possible that the tides have turned and maybe we are the ones isolated from society from our very own obsessive behaviours?

If anything at the end of the day The Devil’s Playground makes those ‘funny’ outfits seem less humorous and costume-like as we are lucid to the darker, emotional exploration that lead to the individual wearing it. Ironic might it be that what we perceived as one of the most antiquated and backwards communities might just be the most affluent in their knowledge on the human condition.