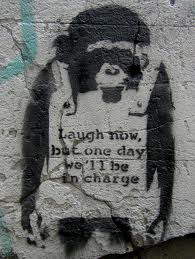 There is something to be said about monkeys in films. Part cute and cuddly, part vicious and protective they have been continually reduced to predictable human stereotypes. King Kong, Mighty Joe Young or even the charming monkey Jack from Pirates of the Caribbean are all victims of this monkey stereotype curse which plagues the film industry.

What is this curse you ask? No it is not Mayan or Egyptian and no it’s not stopped by the blood of Orlando Bloom and Cortez gold – it’s far less dramatic and unfortunately void of dirty money and semi-shirtless men. It is an ancient curse which originates from our own arrogant speciesism, aka prejudice against animal species. Our troubled ancestors instilled their values of animals as being lower on the food chain (thus lower in power and respect) into our innate judgments and these views transpired into the minds of generations past, present and future.

It may not seem like a pressing issue but the manifestation of this curse in the documentary Project Nim raises ethical questions about own our human behaviour and just how little our speciesism has evolved. By the 20th century it should be hoped that as a collective generation we would have gained some insight into the animal kingdom and the cruelty of our prejudices, but Project Nim captures a very ignorant picture.

Nim’s birth provides a horrible 30-second memoir of his life as within moments he is removed from the maternal comfort of his mother for scientific exploration. His life ricochets from one horrible encounter to another: being taught sign language only to be excluded from communication with his own species to being subjected to testing of medical products and eventually residing in an equine rehabilitation farm to live out the rest of his natural life.

It is distressing to watch, especially considering none of the content is fiction. There is nothing that should sit comfortable with the viewer and the filmmaker has deliberately edited this movie to this single purpose. Cotton wool does not exist in the movie nor does it exist in the real world.

I don’t mean to be heavy-handed and cast judgment on the entire human population for we are not all afflicted with the curse. The film industry is not some evil monster either; it is merely projecting the views and stereotypes within society. But will films ever stop portraying these limited stereotypes if society never does? Will movies or documentaries such as Project Nim remain a rarity?

Speculation can lead us anywhere and while we can all join up for PETA or Greenpeace to comfort our guilt, a shift in society will only be achieved if we accept our prejudices. Our moral hierarchy has some room for speciesism below racism, sexism and ageism. Yep our moral agenda is pretty jam-packed with fighting against the intolerances in society; it’s far from a pretty reflection of the human condition. Keep scrubbing those mirrors cleaner and maybe we will see the reflection of creatures such as Nim.

But there is hope and it’s not selective only for the primate species. Animal rights organisation Animals Australia has seen an increase in the intolerance of animal cruelty, likening it to a turning tide. If this tide reaches further along the beaches of ignorance it may be possible that these invalid stereotypes will wash away.

So stop, take a walk and soak your feet in this water of knowledge. Reconsider those inappropriate giggles of ill-constructed monkey mayhem over that butter popcorn when you go to the cinema next. By all means go bananas over the movie, just don’t go bananas over the hilarity of the monkey’s representation.

Thank goodness for films such as Project Nim for addressing the dark topics in our society such as speciesism, may we only pray that one day documentaries like this needed be ever produced.