A clique of one’s own: Emerging Writers’ Festival 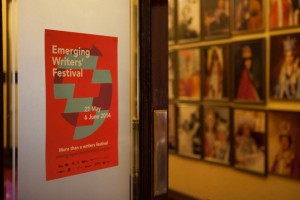 Writing is a lonely job, unless you’re a drinker, in which case you always have a friend within reach. – Emilio Estevez

Romance and legend surround the solitary life of a writer. We imagine inspired musing with a companion glass of red; frantic midnight typing in the back room while insight and lamplight spear through a dark, silent house; a connection to deep spiritual truths; beauty and genius and creativity wrapped up in one giant myth.

These images can all be true. But in that dim room at 2am, it is easy for fear to settle heavily onto your lap like a purring Russian Blue. As in any creative life or work of passion, each writer endeavours through personal struggles, regularly confronting (or dutifully ignoring) doubt, failure and lack of purpose. The struggle tempts you to convince yourself that it belongs solely to you.

The reality, however, brings great hope: many have faced these fears before you; many are facing them right now.

A few weeks ago, I went to the Emerging Writers’ Festival, which was held 27 May – 6 June in Melbourne. As well as an opportunity to hear from the talented, the profane and the stunningly articulate, it was a blessing to meet other writers in similar situations to my own. They, as well as the ones who have ‘made it’, have faced the same battles in the back room at witching hour.

The biggest event of the eleven-day festival was The National Writers Conference, which spanned a whole weekend. Within the program of forums and panels with little-known and better-known writers, many confessed to regularly confronting fear. Hannah Kent, who wrote Burial Rites and had a ‘fairy tale road to publication’, confided in us: ‘I can find writing really terrifying.’ 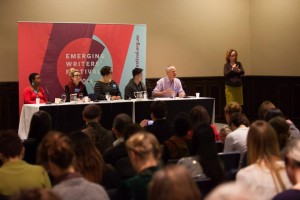 Dion Kagan was one of the panellists at Emerging Q&A (like ABC’s Q&A but with interesting guests and a sassier host). In a moment of honesty, he laughed: ‘As polished and gorgeous as we look up here, we’re all dying on the inside.’ Dion acknowledged the frightening element of putting yourself under scrutiny, a huge element of publishing words.

Non-fiction writer Benjamin Law reminded us that writing as a job means learning how to deal with endless criticism: ‘This is a profession that is not conducive to robust mental health. Writing is demoralising – most of your pitches will be rejected.’

As Charlotte Wood wrote in the 2013 book, The Emerging Writer, these experiences are a regular part of the life we’ve chosen. In spite of them, she says, we must choose confidence: ‘It won’t come from publication, or awards, or sales, or reviews. It will come when you decide to have it.’

I know what she means. I was invited to perform at Amazing Babes, an event based on Eliza Sarlos’ excellent storybook about the women that have inspired her. On a drizzly Saturday night, eight literary ladies took to a dark, fairy-lit stage in the back room of a Brunswick pub to declare stories of hope, inadequacy, and friendship to the sold-out crowd.

Some of us were wary of getting behind a microphone. Brodie Lancaster, founder and editor of zine Filmme Fatales, admitted at the beginning of her speech, ‘My voice isn’t shaking because I’m emotional. I’m nervous.’ In response, the crowd whooped and cheered her; Brodie smiled and read on.

And let me tell you, the rest of us (Michelle Law, Kat Muscat, Sam George-Allen, Jo Randerson and others) presented a powerhouse performance that were all vulnerable, funny, and sincere. The rawness poured from the stage and swam in the air. The audience was enthusiastic, propelled by the knowledge that we are all in this together.

I’m not sure how to express this without a smattering of sentimentality: EWF brought together a community full of love. We’ve all faced the same insecurities and fears. We are all sisters and brothers of the same family.

I met people on the stairwell galloping up to a talk on comedy. I went out to lunch with a friend I met via the #ewf14 hashtag (#friendsirl #yolo). A new mate took me on a behind-the-scenes tour of the SA Vic Library and, as a self-confessed bibliophile, I found it MAGICAL. 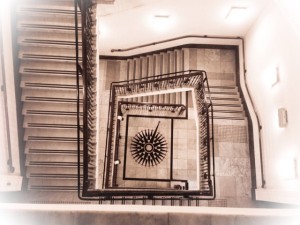 The State Library of Victoria’s pendulum staircase. Thanks for the tour, @writingjordi!

A few weeks ago, fellow emerging writer Justin Heazlewood published an article on negativity among Australian creatives, in an excerpt from his new book, Funemployed. ‘If depression is the Black Dog,’ he writes, ‘Then jealousy is the Black Cat.’ It seemed to him that other people’s success was at the expense of his own. But he goes on to write that he realised collaboration and common ground unites, not divides, artists.

At 5×5, the session that kicked off The National Writers’ Conference, Maxine Beneba Clarke declared what a writer must treasure: ‘Community. When others around you rise up, you also rise up.’

Oh, it is easy to wish you were given someone else’s particular intersection of hard work, talent, and luck. But relationships within the literary scene are hugely important. In my experience, these relationships are marked by politeness, kindness and the sharing of wisdom. When we have success, many of us share our success with others.

Mel Campbell echoed this thought when deconstructing literary circles in her piece for Overland on Literary Cliques. Although she had a more cynical view, she admitted that they ‘alleviat(e) feelings of self-doubt and professional vulnerability’, and ‘use the logic and language of friendship to promote members’ careers.’

So when we’re all in one place at EWF, it’s important to reach out. Although I found it terrifying to fly solo, it’s a great opportunity to connect with similar creatives. Meghan Brewster wrote on her blog Manuscrapped about attending the festival alone:  ‘I have placed myself in a position where the only way to move forward is to step out of my comfort zone, and speak, with my own voice, to strangers.’

It is tempting to slide into the stereotype of lonesome yet noble writer. But at EWF I was welcomed into a positive community that is easily accessible online (‘What’s your Twitter handle?’ was a commonly overheard remark). For we are united by our shared struggles: the doubt, the fear heavy on our laps, and the divine compulsion to write.

For a more detailed write up on EWF, visit:

2 thoughts on “A clique of one’s own: Emerging Writers’ Festival”