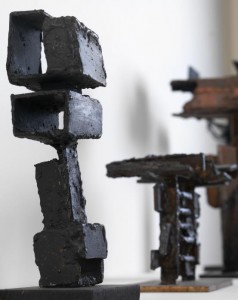 Currently showing at the National Gallery of Victoria (NGV), in Melbourne, is a major survey honouring 99-year old Australian sculptural artist Inge King.  Renowned as one of Australia’s most important sculptors, Inge King: Constellation celebrates her extraordinary 60-year career through full-scale pieces and maquette studies, alongside recent sculptures and collages, her lesser-unknown jewellery designs and many early works, some of which have never been on public display .

Scale is the most immediate thing you notice about Inge King’s work, and it also reveals the most about the artist. When she speaks about her 70-year career in abstract sculpture, her ambition is obvious. ‘Unless it’s a challenge you don’t produce anything worthwhile,’ she responds, when asked about her iconic sculptures dotted around Melbourne, notable for their large scale and locations. The Arts Centre at Southbank, universities, two major freeways and the Heide Museum’s sculpture garden all boast King sculptures that have become a firm part of the city’s landscape and consciousness.

When she arrived in Australia from Germany, via the United Kingdom and the USA, she was decidedly underwhelmed by the parochial 1950s culture and mindset. She quickly realised her ideas and visions of a new contemporary sculpture would have to be tempered. After studying in Scotland and London, hanging out with the likes of Mark Rothko and Herbert Ferber before meeting Australian painter Grahame King, the atmosphere in Australia must have felt stifling to King. Elsewhere, she’s likened it to opening a flat can of beer.

However, not feeling at home in London either, she was ready to embrace the unfamiliar: ‘Australia has to be sought after, you have to look for it, to find its wonders and its marvelous aspects,’ she says now, after working and living here for 60 years.

In 1959, eight years after her arrival, she was living in Warrandyte amongst other artists and creatives when she met a neighbour who owned an arc welder. A swap of the welder for a painting by her husband would prove to be fateful. With this piece of machinery, she could begin to work on a larger scale with metals such as steel and bronze. Modernism was now at her fingertips.

Her technique around this time involved welding together large sheets of steel to create abstract forms, before coating the entire structure in black enamel paint. The paint shows up the tiny details and ragged edges all the better. The molten beads of metal at each join, frozen in time, give each work a dynamism that makes it feel alive. Tenement in particular is an arresting example of King’s work in this period, with its rectangular steel components and simplicity delivering a highly evocative representation. Other highlights are the monumental Flight Arrested and the eerie Eisenwald (Iron Forest).

For a woman to work with metal at such scale was groundbreaking in the 1960s. The world of sculpture, in particular, was still very male-dominated. King pushed people’s expectations further with her work in the 1970s and 1980s. After winning a competition to design a memorial for the Royal Australian Air Force in 1972, King began working with engineers and fabricators to construct her designs. This further opened up the possibilities of what she could achieve with abstraction, particularly in a dramatic landscape.

The Australian environment, something she describes as vast and untidy, has been a continuing source of inspiration. ‘The only way to untap [sic] it is with great simplicity and power,’ King states.

Reflecting this, her mid-career work is more polished and forceful. A series of mandalas, including the striking Black Sun, Sails and the immediately recognisable curved forms of Forward Surge are a choice selection in the retrospective that demonstrate an artist coming into her own. Unfortunately, the curation at this point lets the show down- a series of her illustrations and maquettes spill over into another gallery of Australian work in an unnecessary distraction.

The final chapter of the retrospective ends with King’s Celestial Rings series, inspired by the first images taken by the Hubble Telescope in 1990. The work King produced 15 years later has taken the wondrousness of the otherworldly and illuminated it further through the simplicity of her technique. Brushed steel is employed throughout the series, a conscious choice as it does not reflect the viewer or their surrounds. Light, on the other hand, is reflected everywhere, off every small lesion in the material’s surface, creating a literally dazzling effect on the viewer in much the same way those first images from space dazzled everyone back home.

Discs, rings, horseshoes and bulbous forms are the building blocks of King’s own small galaxy. Scale is, as elsewhere, critical. Upright rings spanning two and three metres, balancing against one another on precarious angles, achieve an inexplicable harmony in Celestial Rings IV and Rings of Jupiter (3). Larger rings enclose smaller ones, whose force fields intersect without chaos or destruction. The careful and considered balance in her arrangements is quite the feat given the complex elements involved. I found myself walking around each sculpture several times, feeling like I was the one doing the orbiting, trying to comprehend each arrangement.

Despite the peace these late works convey, at the opening event of the retrospective last month, King said to her agent, ‘What do you think of the show? Is it ok?’ A sign of a true artist.

Inge King: Constellation is showing until 31 August 2014. Entry is free.