feminism and testicles: peeing on manga girls at the asian beer cafe 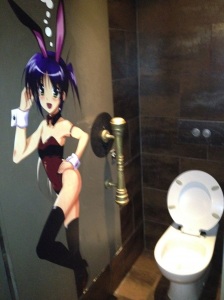 Recently a group of friends and I went to Melbourne Central’s Asian Beer Cafe. After a few drinks I made my way to the bathroom as one tends to do after consuming a few ciders.

What I found made me pause. On the urinal there were three manga girls. And they weren’t wearing much in the way of clothes—especially the one in a skimpy schoolgirl’s uniform.

I gulped and thought: I’m not okay with this. Why would any sensible person want to urinate on pictures of women?

When I told my friends what I’d found in the men’s bathroom it seemed to be common knowledge.

‘You didn’t know they had naked girls that you can pee on in the bathroom?’

This viewpoint is unfortunate because, contrary to popular belief, we don’t live in a magical post-feminist world.

Take this recent example of Catherine Deveny on last week’s Q&A. As we all know, Deveny said what many of us were thinking—but what many of us wouldn’t have the nerve to say aloud (let alone on national television).

The bible, she explained, is ‘basically social engineering embedded in fairytales and horror stories, which is chock full of homophobia, misogyny, discrimination and division.’

A good friend put it like this: ‘I agreed with everything Catherine Deveny said, she just said it in all the wrong ways.’

Hang on a second. When asked for her opinion, Deveny gave it. She kept her statements short, sharp and to the point (unlike certain other members of that week’s panel who tended to go on and on and not give the articulate Anna Krien the time she deserved). With this in mind, is it possible for her to have responded in a ‘wrong’ way?

Regardless of this, the abuse and vitriol aimed at Deveny saw Twitter go into hyperdrive. I’m not going to describe what was said about her, for a variety of reasons, but you can use your imagination.

Let’s just say that if Deveny had been a man, I doubt anyone would have labelled her with half of what was said on Twitter. And if the paste-ups put on the men’s urinal at Asian Beer Cafe had been Tony Abbott, I’m pretty sure there would be much more of an uproar.

As a feminist you don’t have to love, let alone like, Catherine Deveny. But one should appreciate what she did last week. She proudly stood up to what Chrys Stevenson calls a ‘passive-aggressive … bully’. Not enough people would have the guts to do the same.

Overall I’m not exactly sure how I would have acted on the Q&A panel if I had been in Deveny’s shoes. But one thing is certain: next time I go to the Asian Beer cafe, I’ll be sure to use the stalls and not the urinal.