feminist of the week: gemma watson 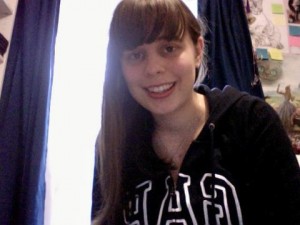 How would you describe yourself and your life?
I grew up in the Eastern suburbs of Melbourne on a steady diet of politics, comedy and literature. Casual work, full-time study, and coffee are my daytime pursuits while at night I am furiously honing my writing skills. Most of the time I’m fairly shy, but my writing fingers do reveal a louder side to me (best calmed down by the immediate application of chocolate). Having said that, I’ll keep an open mind if you do.

I’m not far away from graduating at RMIT university with a BA in Creative Writing and I’m also currently interning for a publishing company. It’s exciting and nerve-wracking and I love it.

What does feminism mean to you?
To me, feminism is about being treated as an independent, individual person worth the same respect and owed the same rights as any other person. It means women and men who believe in equality and are willing to fight for it.

Do you think feminism has a place in today’s society?
Yes. I think feminism has done some really important things to shape the way we live today and the biggest mistake we could make would be to forget that. We still live in a very male-run world and I don’t see that changing much at the moment. I think there are a lot of people out there who don’t recognise the inequality that’s staring them in the face. The media is especially good at messing with our perceptions and this has caused a major distortion to our ideas about how women should look, act and be treated. I think feminism reminds us not to accept things verbatim and to try to keep a balanced view.

Which feminist stereotype annoys you the most? Why?
I think that the 60s/70s movement has left a bad impression of feminists. We are not prudes and we don’t hate men. If you believe in equality for all, then you are a feminist, even if you’re not a woman. So it annoys me when people – especially women – start hating on you for not just conforming to the way society dictates. I don’t have a problem with sex and I happen to like men, quite a bit. I just want to be judged for what I do and say, rather than for what dress I’m wearing, how old I’m looking or how much make-up I can cram on my face.

If you could pass on one piece of advice to other feminists, what would it be?
Don’t be afraid to stand up for your rights. Life’s too short to put up with being treated badly; it doesn’t help you now and it doesn’t help future generations. People will always respect you more if you stand for something.

Do you think it is okay to laugh at sexist jokes if you are a feminist?
Short answer, no. No one has the right to make you feel uncomfortable or inadequate about the things you believe in. When people tell these jokes I try not to pay them any attention. I usually find that they’re not really after an argument and they don’t actually have an opinion on feminism anyway. They just want to know if you’re a conformist or not. I’m not, so I don’t laugh. I don’t think you should take offense and tell people off for it either. It’ll fizzle out eventually. But if you laugh, then it says ‘I don’t expect you to respect my opinions or take them seriously’. Best way I can think of to deal with these sorts of jokes is to change the subject and forget it ever happened.

When did you first realise you were a feminist?
I honestly don’t remember. I’ve been passionate about equal rights, since I was a little kid, so probably whenever I first learned feminism was a word. I can’t imagine not being a feminist. So maybe it’s in my genes!