Feminist of the week: Tara Mitchell 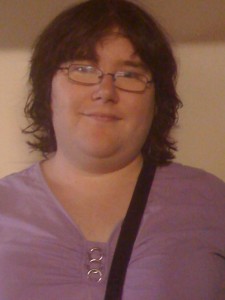 How would you describe yourself and your life?
I never imagined I’d be a Feminist.  Being a transsexual, I was brought up with male privilege for the first 20 years of my life, and this left me quite blind to the reality of women’s lives and the toll that society takes.

It didn’t take long though to learn, and I found myself more and more shocked by the sheer amount of sexism and homophobia/trans-phobia I discovered in the world, such as the impossible false dichotomies of being feminine and stupid or intelligent and cold, of being accused of conforming with stereotypes for trying to fit in, or yelled at to quiet down and stop making waves if you don’t. Coupled with this, I was faced with the needless violence and fights for control and the disrespect and barely masked hatred against women in general that, to my own disgust, is not only accepted, but also actively encouraged by our society.

I was fortunate enough to discover Radical Women, a socialist feminist women’s leadership organisation, last year.  Since then, I have been revelling in the chance to really do something about the problems of ALL types of discrimination, through our work toward a fairer socialist system, in which the capitalist profit system which underlies all forms of exploitation is replaced with a fair, equitable and realistic distribution of wealth.

What does Feminism mean to you?
Feminism to me is about finding true equality, not just for women but for everyone of every race, in every country, of every age, class, sexual orientation, gender identity and any and all other arbitrary barriers which cause people to face discrimination and hatred in our world. I believe that the single guiding principle of Feminism is that everyone should have the same value, opportunities and rights, irrespective of who they are.

Do you think Feminism has a place in today’s society?
Absolutely.  As long as the capitalist patriarchy continues, as long as minorities are exploited, abused and murdered with impunity, as long as every single institution benefits the wants of a few while forsaking the needs of the majority, Feminism will be relevant.

As a socialist feminist, I believe that the entire Capitalist system on which our world is founded is fundamentally geared to oppress and exploit, and the only way to change anything is by uniting women – the world’s only oppressed MAJORITY, and giving them real power, real leadership skills, and real options.

One only needs to turn on the television to see the despicable state of affairs in which the objectification and exploitation of women continues – with a new paintjob so now it’s “empowering” – in spite of the old movements.  What is needed now more than ever is a new movement of working class, diverse and motivated women and minorities to help bring about real social change.

Which Feminist stereotype annoys you the most?  Why?
The bitter old hairy-legged man-hating lesbian.

Not only is this such an obvious stereotype to make you look illegitimate, but it has so many flavours of hatred within it, and is just an incredible mix of sexist, ageist, heteronormative vitriol.  The implication of the target’s worthlessness and pettiness, and the sheer disgust that comes with it makes it a cruel – and common – tool.

Over and over, around the world we have seen – most recently in the Arab Spring movement – women leading the charge, taking the risks, fighting before the men, and oftentimes much more eagerly than them. After all, when you get down to it, it doesn’t matter where you are, women always have the least to lose, and the most to gain, which gives them a special strength in revolutionary battles for equality.  And yet, time and again, we see that once the smoke clears these same women are told to wait for the rights that they have so desperately fought for.  Of course, after they’re promised that they will get their reward “later” they find that other more important things just keep coming up.

My advice then is to remember our strength, our worth, and never make compromises about our rights with anyone.

What makes you really angry as a Feminist?  Is there something or someone that drives you crazy?  Why?
Women who hate Feminism.  I think it’s really dreadful to see people fighting against those who are trying to make their lives better.  I understand where they’re coming from, there have been a number of situations where “Feminists” have made some pretty big errors, and there’s so much stereotyping and negative press, but still it really makes me mad.  I hope that as time goes on, we can reach more and more women and show them what a real Feminist looks like, and get them on side to change the world for the better.

Radical Women (RW) is a socialist feminist, grassroots activist organization that provides a radical voice within the feminist movement, a feminist voice within the Left, and trains women to be leaders in the movements for social and economic justice. It has branches in numerous United States cities; and Melbourne, Australia. Check out their website here.