feminist of the week: thomas bailey 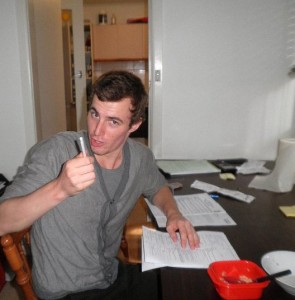 How would you describe yourself and your life?
In a nutshell, I work, study and play in Melbourne. I’m at Melbourne University doing Actuarial Studies (a fancy kind of Commerce) and in my spare time I go to the gym, make lentil soup and tutor schoolkids in Maths. I also have a herb garden and a passion for rock music and (table) tennis. I like peace and quiet, and staying up late with my girlfriend watching the Chaser.

What does Feminism mean to you?
As a guy, I like to think of feminism as a movement towards equal opportunity. I think having unbounded possibilities is important for everyone, and I think that gender equality remains as a barrier to this. I hate the thought of society teaching individuals that their life options are limited by their gender, rather than their will.

What should feminism mean in today’s society?
While I don’t object to the word ‘feminism’, I think it’s often misunderstood by many, because of the connotation of female privilege. I have friends (in particular, male friends) who hear the f-word and roll their eyes – yes, this is due to a lack of awareness, but I can see their point-of-view. The word feminism – from the Latin femina meaning ‘the childbearing gender’ – doesn’t exactly invite men to get involved. I often find myself explaining feminism as gender equality because I think this term better shows how men and women can work together. For me, feminism should mean the ability for anyone – male or female – to choose their own lifepath without gender restriction.

Which feminist stereotype annoys you the most? Why?
I think it would have to be the stereotype that men are against feminism. That we all make sexist jokes and don’t value women in the workplace or take them seriously. I think this is just as judgmental and untrue as the female stereotypes that feminism is fighting against.

If you could pass on one piece of advice to other feminists, what would it be?
Be flexible and accepting of others. It’s a very general idea. But I feel that it’s all too easy for feminists like us to lose sight of the bigger picture. Even within feminism there are people who view things differently – whether it be views towards abortion or towards religion – and I think we need to accept other people for their beliefs, if we want them to accept ours.

Do you think it is possible for women and men to treat each other equally without falling back upon the conventions of femininity and chivalry? Is this notion desirable to you?
I don’t think there’s anything wrong with femininity and chivalry. Personally I like having a girlfriend who is career-driven and opinionated, but I don’t have anything against a man who might look for a mate (male or female) who is quieter and/or would want to take care of the home. I think ‘treating each other equally’ is about being allowed to choose your own lifestyle and roles, so long as you don’t condemn someone else’s choices – for example, their decision to work or not – as wrong.

One thought on “feminist of the week: thomas bailey”