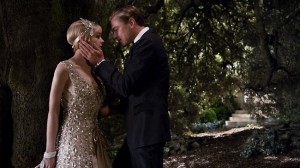 Big, bold and beautiful accurately describe the intense film quality of The Great Gatsby. Complete with mind-blowing situations, beautiful cinematography and intense dialogue, The Great Gatsby is a marvel on-screen, but falls short when it comes to real life connections.

Based on the book by F. Scott Fitzgerald, The Great Gatsby follows the story of Nick Carraway (Tobey Maguire) as he embarks on a life-changing journey to New York. In the era of loose morals and heaps of unneeded money, Carraway enters the world of Jay Gatsby (Leonardo DiCaprio). Gatsby quickly expresses interest in him and it doesn’t take long before Gatsby asks for a favor.

Daisy (Carey Mulligan) is Carraway’s cousin as well as Gatsby’s love interest. Their relationship dates back five years before she was married to her lying, cheating scumbag of a husband (Joel Edgerton). Daisy and Gatsby’s relationship skyrockets as both are reminded what it truly means to love. However, everyone must know any good love story always ends in disaster.

The film is beautiful. Every shot by director Baz Luhrmann is intentional and beautiful. Leaves fall from trees in such a symbolic way; it feels as if he is trying to communicate to the audience. Even the colors involved in the film seem to reach a deeper meaning and unlock questions in life.

Through Luhrmann’s directing, it is easy to feel the glitz, glam and parties, but he seems too focused on the little aspects such that a deeper picture is lost. His symbolic filmmaking may be beautiful, but a sense of sadness is left out.

Dating back to when Fitzgerald first wrote Gatsby, the story was hopeful yet sad. The original book attempted to communicate an emotion toward life, love and everything in between. The film, however, communicates these emotions with a very different light. The parties fall centre to the true depths, which could have been unlocked.  For example, the love between Gatsby and Daisy is not exploited to the fullest and leaves audience members empty when it comes to its inevitable tragic end.

The acting is obviously amazing. What else could be expected from DiCaprio and Maguire? DiCaprio truly is the star of the film for a multitude of reasons. He adequately communicates the sadness of the character while maintaining a sense of fun and lighthearted humor. As Carraway says, Gatsby is the most optimistic person he has ever known, and DiCaprio grasps the essence of the character.

From a feminist standpoint, the film falls short in a variety of ways. Unlike the book, Daisy, the leading woman, is barely more than a stereotypical woman from the 20’s. She gambles her husband’s money, drinks and smokes all day while making time for adulterous affairs. She stays with a disloyal husband even after being given a chance to break free from his cruelty. Other women in the film are also portrayed in the same light. They all come across as abused sluts, not making a name for themselves in any place of life except the bedroom.

The book paints a deeper picture of women, especially Daisy, than the film in the sense that she has her own mind filled with her own choices.  The film neglects to show her decision making abilities, thus portraying her to be a weaker character than Fitzgerald intended.

Overall, it was a beautiful film from the cinematic point of view, but fails to achieve greatness in a few ways. The director fails to make an emotional connection with the audience and women are portrayed in a very bad light. This film is only worth seeing for the beauty and performances of the film.

One thought on “film review: the great gatsby”